FN Herstal provides airborne systems with unprecedented and unequalled firing capabilities for multi-role helicopters and subsonic aircraft while maintaining simplicity of use and crew safety. 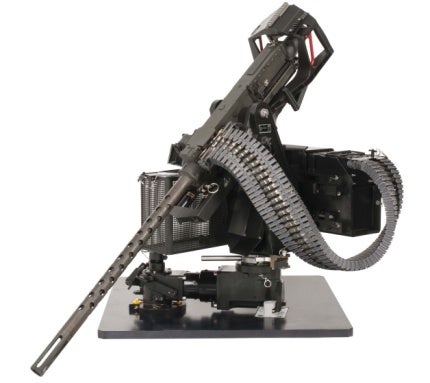 More than just selling weapon systems, FN Herstal develops the complete integration of the system together with the helicopter manufacturer or directly with the end user. The company supervises the installation of all its products and provides operator training as well as a high-quality after-sales service to meet our customers’ requirements.

For 120 years, FN Herstal has successfully equipped generations of soldiers, airmen and marines. Its solid reputation can be attributed to its rigorous professional ethics, ongoing effort to achieve foremost quality, and commitment to efficient service and outstanding customer support. Every weapon FN Herstal builds proudly bears the FN Herstal oval, a mark that represents more than a century of experience making the finest weapons in the world.

FN Herstal’s airborne pintle mounted weapon systems are fully mechanical and do not require any electrical power, making firing possible even if the carrier faces problems. They can integrate two different weapons, either a .50 cal or 7.62 cal FN machine gun.

FN airborne pintle mounted systems can be window-, door- or ramp positioned and offer the following:

FN airborne podded mounted systems feature a fit and plug concept through 14in Nato standard lugs, for easy and quick adjustment of the helicopter configuration depending on the mission.

To date, FN Herstal airborne weapon systems have been selected to equip more than 2,800 helicopters and subsonic aircraft worldwide. FN Herstal is also a market leader in the supply of small arms.