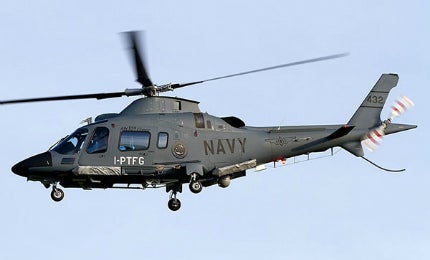 The helicopters are manufactured by Italian company AgustaWestland.

The helicopters will be operated by the Philippine Air Force’s 15th Strike Wing in missions such as close-air support, armed air reconnaissance, forward air control, and armed escort.

"AW109 Power can be configured for a range of missions, including search and rescue, law enforcement, air ambulance, coast guard, border patrol and surveillance."

AgustaWestland won a contract worth P3.4bn ($77m) through a public bidding for the supply of eight AW109 helicopters to the Philippine Air Force in November 2013. The first two helicopters were delivered in December 2014.

The Mauritanian Air Force placed an order for an undisclosed number of AW109 Power helicopters for reconnaissance and border patrol missions in June 2013.

The helicopter is operated by one or two pilots and accommodates up to seven passengers. The cockpit is fitted with pilot / co-pilot doors and windows with sliders. The cabin has two large sliding doors and double-layer acrylic windows.

With a volume of 3.5m³, the wide cabin can be easily configured to meet various mission equipment. The spacious baggage compartment can be extended up to 2.3m to house mission-specific loads.

The interior is installed with soundproofing, bleed air heater and air conditioning to facilitate comfortable seating for occupants.

The platform offers high controllability and manoeuvrability when undertaking missions in the most demanding weather and environmental conditions.

The digital, glass and NVG-compatible cockpit is equipped with six liquid crystal instrument displays to provide the aircrew with navigational and flight information, as well as enhanced situational awareness both during the day and at night.

This project forms part of our recent analysis and forecasts of the global military aircraft market available from our business information platform Strategic Defence Intelligence.