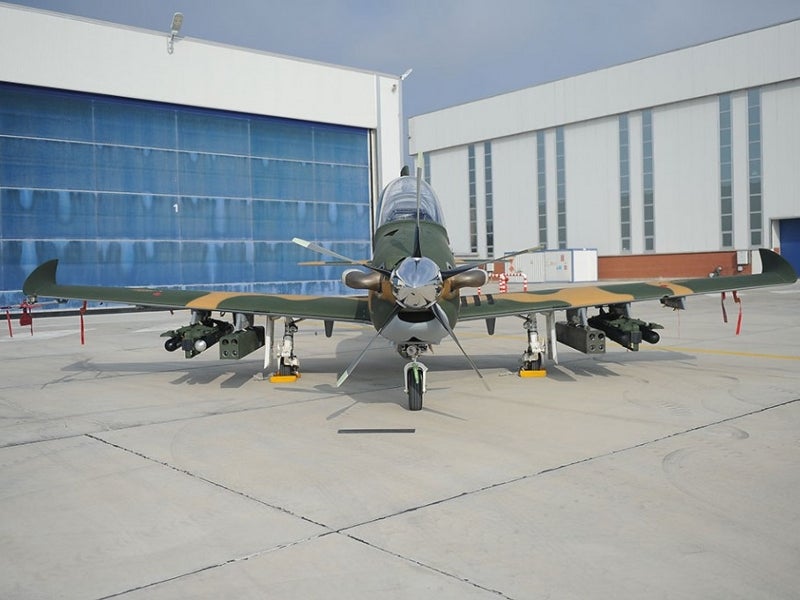 Hurkus-C is a next-generation armed variant of the Hurkus basic trainer aircraft, designed and developed by Turkish Aerospace Industries. The first prototype of the Hurkus-C was unveiled in February.

The attack version is intended to support different operational requirements of the armed forces and can be deployed in missions such as close air support (CAS), light attack, intelligence, surveillance, armed reconnaissance, and basic and primary pilot training.

The Hurkus-C light attack / reconnaissance aircraft features fixed-wing design with armour reinforced airframe. The aircraft has an overall length of 11.17m and a height of 3.7m.

The main wings are mounted near the bottom of the fuselage. Winglets are fitted on the upper surface of each wing to generate additional lift and greater aerodynamic efficiency. The conventional tail section comprises two low-mounted horizontal planes with a single vertical stabiliser.

The aircraft’s take-off and landing operations are assisted by a retractable tri-cycle landing gear consisting of two main gears and a steered nose gear. The landing gear also allows the aircraft to operate on unprepared runways.

The Hurkus-C attack variant is equipped with a total of seven hardpoints, three under each wing and one on the fuselage, to carry external loads weighing up to 1,500kg. It can carry a fuel tank with a capacity of 70 gallons on external mounts.

The aircraft is also installed with self-protection systems.

The Hurkus-C light attack / reconnaissance aircraft is designed to integrate a range of bombs and rockets on the external stores to engage ground-based stationary and moving targets.

Consisting of optical and thermal imaging cameras, the EO / IR turret provides crew with the ability to identify, track and engage targets during both during day and at night.

The aircraft uses a video / data link to transmit imagery and telemetry data captured by the onboard sensors to the ground station.

The Hurkus-C armed version can be powered by either a single 1,600hp Pratt and Witney Canada PT6A-68T turboprop engine or a 1,400hp TUSAŞ Engine Industries turboshaft engine.

"The attack version is intended to support different operational requirements of the armed forces and can be deployed in missions such as close air support (CAS), light attack, intelligence, surveillance, armed reconnaissance, and basic and primary pilot training."

Mounted in the forward portion of the aircraft, the engine drives a five-bladed Hartzell HC-B5MA-3 aluminium propeller, which provides increased manoeuvrability in forward flight.

The maximum cruise and stall speeds of the basic variant are 574km/h and 143km/h respectively. The aircraft has g limits of +7 / -3.5g and maximum service ceiling of 35,000ft. It is capable of flying over a distance of 1,478km.

A prototype of the Hurkus-A trainer performed its maiden flight in August 2013. The aircraft is certified by the Turkish Directorate General of Civil Aviation (DGCA), as well as by the European Aviation Safety Agency (EASA).