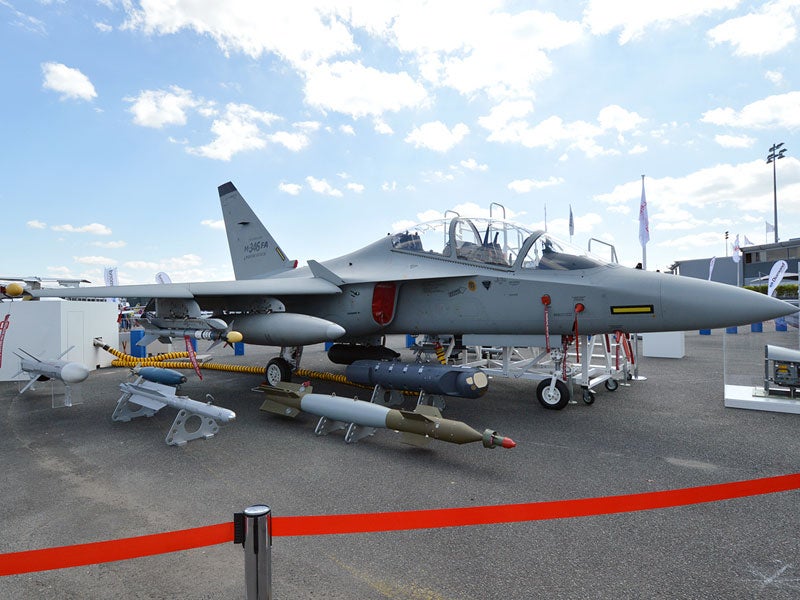 The two existing variants of the M-346 family include the M-346 Advanced Jet Trainer (AJT) and multi-role M-346FT (Fighter Trainer).

With a maximum take-off weight of 10,400kg, the combat aircraft can carry various external loads such as GPS-guided / laser / unguided air-to-air and air-surface weapons, bombs, and targeting pods to attack air and surface-based targets.

A gun pod can be fitted to house aircraft ammunition. Additionally, the aircraft carries target designation and tactical reconnaissance pods on the external hardpoints to detect and locate the targets in both day and night-time conditions.

Sensors and countermeasures of the M-346FA

"The two existing variants of the M-346 family include the M-346 Advanced Jet Trainer (AJT) and multi-role M-346FT (Fighter Trainer)."

The electronic warfare pods are fitted to the aircraft wingtips to counter enemy radars and detection systems.

The M-346FA fighter aircraft is powered by two Honeywell F124-GA-200 turbofan engines, which develop a maximum thrust of 2,850kg each.

The powerplant delivers a limit speed of 572kt and a maximum level speed of 590kt. The aircraft has a service ceiling of 45,000ft and can climb at a rate of 21,000ft/min. The aircraft’s limit manoeuvring load factor is 8g/-3g.

The high-fuel capacity of the aircraft allows it to endure for two hours and 40 minutes. The addition of up to three 630l external fuel tanks increase the flight time to approximately four hours.

The aircraft can perform air-to-air refuelling for both time-on-station and long-range endurance missions.