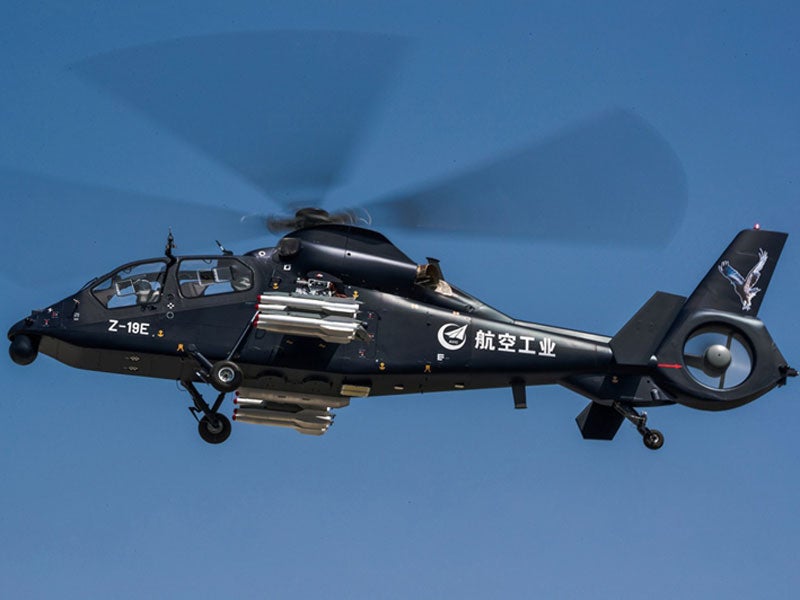 The Z-19E light attack helicopter, an export variant of Z-19 Harbin armed and reconnaissance helicopter, performed its maiden flight in May.

The helicopter is manufactured by Harbin Aircraft Industry Group (HAIG), a subsidiary of Aviation Industry Corporation of China, to provide fire support for the armed forces. It is designed to destroy ground-based targets, including armoured fighting vehicles, main battletanks, troops, and military installations. It can also engage enemy helicopters and low-flying targets under complex battlefield conditions.

In addition to attack missions, the export variant can perform other tasks such as anti-smuggling, anti-terrorism, counter-piracy, patrol, helicopter escort, and reconnaissance.

The total length of the helicopter with rotors is 13.72m and the total width without rotors is 3.96m. With 4,250kg of take-off weight, the helicopter can carry two operators, 820kg main fuel tank and 280kg auxiliary fuel tank, whereas the empty weight is 2,510kg.

The helicopter comes with a non-retractable undercarriage consisting of two main wheels under the fuselage and one tail wheel under the rudder.

Wingtip devices are installed on the stub wings to provide additional lift by reducing the drag.

The Z-19E light attack helicopter is equipped with four hardpoints, two under each wing, to carry air-to-ground and air-to-air missiles, and machine guns.

It can be armed with either four Blue Arrow 9 air-to-ground missiles mounted on a quad launcher or four 18-barrelled 57mm rocket launchers.

Various weapon combinations can be used based on the helicopter’s mission, such as twin Blue Arrow 9 missile quadruple racks with either twin 18-barrelled 57mm rocket launchers, twin TY-90 air-to-air missiles and one auxiliary tank, or two 12.7mm machine guns mounted on a gun pod.

Featuring a semi-active laser guidance system, each Blue Arrow 9 missile can engage ground targets at a maximum distance of 6km. The 57mm rocket has a maximum range of 2km and is used to defeat surface targets.

The Z-19E combat helicopter accommodates a pilot and a gunner in tandem configuration, incorporating armour protection.

The cockpit is designed to offer panoramic wide-angle view through overhead and side windows. It also provides operators with night attack capability.

The helicopter is provided with electronic warfare suite, including radar warning receivers.

Additionally, the helicopter is fitted with a nose-mounted electro-optical turret that combines electro-optical / infrared sensors and a laser rangefinder to identify and track targets and to capture high-resolution imagery and video in both day and night conditions.

An electronic self-protection system is installed in the helicopter to provide self defence against threats from guided missiles and airborne targets.

“In addition to attack missions, the export variant can perform other tasks such as anti-smuggling, anti-terrorism, counter-piracy, patrol, helicopter escort, and reconnaissance.”

The onboard fuel tank is provided with self-sealing capability for protection against damages and blasts. The anti-crash body and bulletproof seats keep operators safe from firearms and guns.

The crash-worthy landing gear offers increased survivability for the occupants.

Engine and performance of Z-19E

The Z-19E export variant uses two WZ-8C turboshaft engines, which develop a maximum continuous power of 581kW and a take-off power of 626kW each.

The helicopter is capable of staying in the air for up to 162 minutes and can withstand temperatures between -40°C and 50°C.