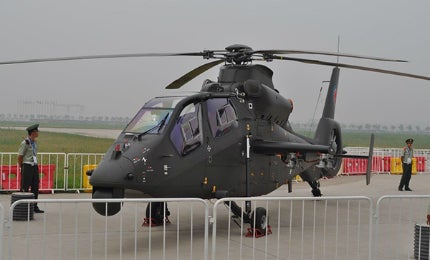 It is based on the Harbin Z-9W military utility helicopter, which is a license-built variant of the Eurocopter AS365 Dauphin multi-purpose helicopter.

The Z-19 can primarily conduct attack, armed reconnaissance and scout missions. It is capable of destroying enemy tanks and other land-based targets.

In May 2010. the helicopter performed its first flight and was introduced at the China International Aviation & Aerospace Exhibition, held at the Airshow China held in Zhuhai in November 2012.

The Z-19 light attack and reconnaissance helicopter features a conventional, stealthy design integrating a trimmed forward fuselage and a tandem cockpit. It also has a low acoustic signature and can execute operations under difficult weather and environmental conditions.

A four-bladed main rotor, which has a diameter of 11.9m comes fitted into the fuselage, as does a fenestron tail rotor and two stubby wings. The fuselage is also equipped with non-retractable front-landing gears for safe take-off and landing.

The helicopter has a length of 12m and height of approximately 4.01m. Maximum take-off weight is 4,500kg, whereas the empty weight is 2,350kg.

A crew of two operate the helicopter. This includes a pilot, who is seated in the front of the cockpit and a gunner, accommodated at the rear. Crash-resistant seats and armour plates come with the cockpit to offer protection for the personnel. An infrared-suppressing exhaust system is also installed for protection against infrared-guided threats.

Avionics on board Z-19 helicopter

The helicopter is also equipped with the latest mast-mounted active millimetre-wave (MMW) radar to find and engage targets over long ranges and comes with advanced helmet mounted sight (HMS) and fly-by-wire controls.

"Powered by a solid fuel rocket, the 25kg missile can reach speeds up to 220m/s."

The TY-90 air-to-air missile measures 1.86m in length and 90mm in diameter. It weighs 20kg, which includes a 3kg warhead and it can reach a top speed of Mach 2. Targets can be struck by the helicopter within a range of 500m to 6km.

The HJ-8 ATGM has an overall length of 1.56m and diameter of 120mm. Powered by a solid fuel rocket, the 25kg missile can reach speeds up to 220m/s. The maximum operational range of the missile is 6km.

Engine and performance of the light attack helicopter

The power-plant provides a cruising speed of about 245km/h and a maximum speed of approximately 280km/h. The helicopter has a maximum range of 700km, can climb at a rate of 9m/s and operate at a ceiling of 2,400m. It can perform airborne operations for more than three hours.

This project forms part of our recent analysis and forecasts of the global military rotorcraft market available from our business information platform Strategic Defence Intelligence. For more information click here or contact us: EMEA: +44 20 7936 6783;Americas: +1 415 439 4914; Asia Pacific: +61 2 9947 9709 or via email.

ALTIUS-600 is a small unmanned aircraft system (UAS) designed to gather intelligence in real time. The UAS is part of…

F-15EX is a next-generation fighter aircraft being developed by Boeing for the US Air Force (USAF). It is the latest…