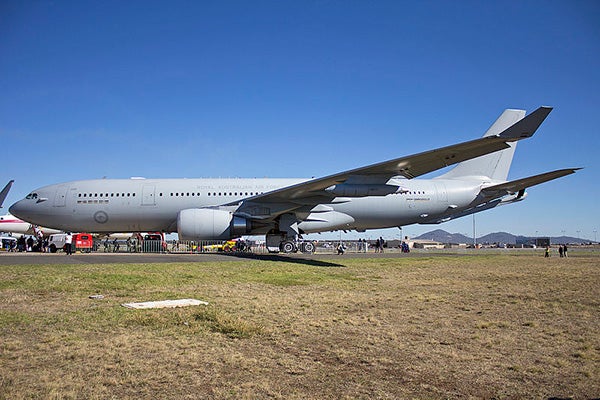 The KC-30A aircraft is operated by No. 33 Squadron from RAAF Base Amberley to provide air-to-air refuelling for air combat to enhance flight time and range. The aircraft are being modernised to achieve final operational capability and to refuel E-7A Wedgetail Airborne early warning and control aircraft, C-17A Globemaster and other KC-30As.

The aircraft will also be able to refuel the RAAF’s P-8A Poseidon surveillance aircraft and the F-35A Joint Strike Fighter.

BAe 146 C Mk3 is a military transport aircraft designed and developed by BAE Systems for the UK Royal Air Force.

The flexible KC-30A design incorporates a variety of military communications and navigation suites, and a comprehensive defensive aids suite.

The aircraft has a height of 17.4m, a length of 59m and a wingspan of 60.3m, while the maximum take-off weight and the maximum landing weight are 233t and 180t respectively. It can provide air lift for up to 270 passengers in two classes. The under-floor freight and fuel capacities are 36,000kg and 111t respectively.

The tail section of the aircraft is mounted with the aerial refuelling boom system (ARBS), which is around 12m long when retracted and up to 18m when extended. The flow rate of the ARBS is 8,040lb/min.

The KC-30A aircraft is fitted with a pair of all-electric refuelling under-wing pods and a 90ft hose-and-drogue system to refuel probe-equipped aircraft at a flow rate of 2,810lb/min. It also features a universal aerial refuelling receptacle slipway installation (UARRSI) with a flow rate of 8,040lb/min.

The KC-30A MRTT aircraft is equipped with an advanced mission planning system to provide mission support for on-ground and in-flight mode of operations as well as for air-to-air refuelling (AAR) missions. A Link 16 real-time data-link is installed to exchange tactical information and imagery in real time.

"The flexible KC-30A design incorporates a variety of military communications and navigation suites, and a comprehensive defensive aids suite."

Military Electronics, Subsystems and Components for the Air Defence Industry