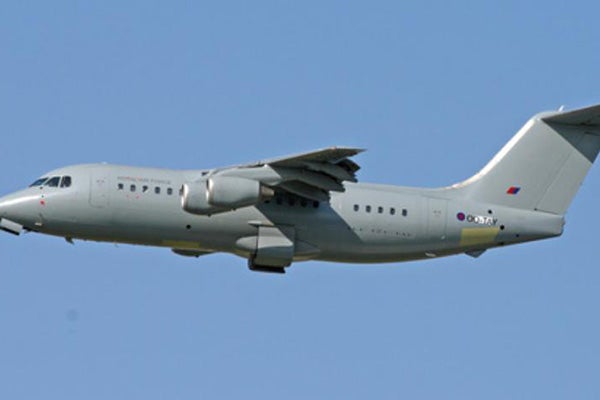 BAe 146 C Mk3 is a military transport aircraft designed and developed by BAE Systems for the UK Royal Air Force. The aircraft provides flexible transportation of personnel and cargo and is capable of operating from short runways.

The aircraft can execute Command Support Air Transport tasks or Tactical Air Transport operations and can be easily configured for passenger transport, for all-cargo, or for mixed passenger and cargo operations.

The A400M (formerly known as the future large aircraft) is a military transporter designed to meet the requirements of the air forces of Belgium, France, Germany, Spain, Turkey and the UK.

The MoD awarded a £15.5m contract to BAE Systems Regional Aircraft for the conversion of two BAe 146-200QC aircraft into military configuration under Urgent Operational Requirement (UOR), in June 2012. The two aircraft were delivered to the UK Royal Air Force in April 2013.

The military version BAe 146 C Mk3 is equipped with a large cabin volume, which can carry a cargo load of 23,500lb or 94 passengers. Pallets, containers and awkwardly-shaped cargo can be easily loaded through a large upward-opening freight door placed at the rear of the aircraft. The freight door has a width of 3.33m and height of 1.93m.

The modification programme also includes two further interior options to allow for a significant amount of carry-on baggage in storage containers and an alternative layout of 54 seats. The configuration includes two cargo pallets, one transition pallet and two baggage containers.

The new BAe 146 C Mk3 military transport aircraft is equipped with a variety of military equipment to deliver enhanced capabilities in both passenger and freight roles.

A Defensive Aids System is fitted to offer an appropriate level of protection. A successor identification friend or foe (SIFF) system is also incorporated for the identification of friendly forces.

"A Defensive Aids System is fitted to offer an appropriate level of protection."

The aircraft is powered by Honeywell ALF 502R-5 turbofans, which provide a take-off thrust of 6,970lb. It flies at a maximum speed of 300kts and has maximum take-off weight of 42,184kg.

The prime contractor for the modification programme is BAE Systems Regional Aircraft based in Prestwick, UK. It procured equipment and provided design and integration of military equipment for the new aircraft. The company was also responsible for supply chain management and overall management of the conversion programme.

VRR, a company based in the Netherlands, was contracted by BAE Systems to provide new cabin baggage platforms, and containers and cargo pallets for the modification programme.