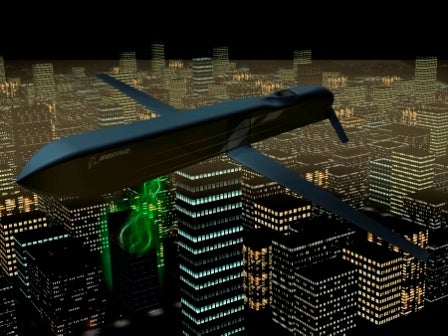 The US Air Force Research Laboratory (AFRL) Directed Energy Directorate and Boeing have successfully completed the first weapons test flight of the counter-electronics high-powered microwave advanced missile project (CHAMP) over the Utah Test and Training Range at Hill Air Force Base (AFB) in the US.

During the flight test, the CHAMP missile followed a pre-programmed flight plan and released bursts of high-powered energy that enabled degradation of the simulated target’s data and electronic subsystems, with minimum collateral damage.

"In the near future, this technology may be used to render an enemy’s electronic and data systems useless even before the first troops or aircraft arrive," Coleman added.

The testing is part of a three-year, $38m joint capability technology demonstration (JCTD) contract secured by Boeing in April 2009 for the production and evaluation of a non-lethal, high power microwave (HPM) airborne demonstrator for the CHAMP programme.

The missile completed its first successful flight test at the Utah Test and Training Range in early 2011.

Led by the AFRL Directed Energy Directorate at Kirtland AFB, the CHAMP aimsto develop an air-launched directed-energy weapon capable of paralysing enemy electronic targets with minimum or no collateral damage.

Expected to serve as a non-kinetic alternative to legacy explosive weapons, the missile facilitates selective high-frequency radio wave strikes against multiple targets during a single operation.