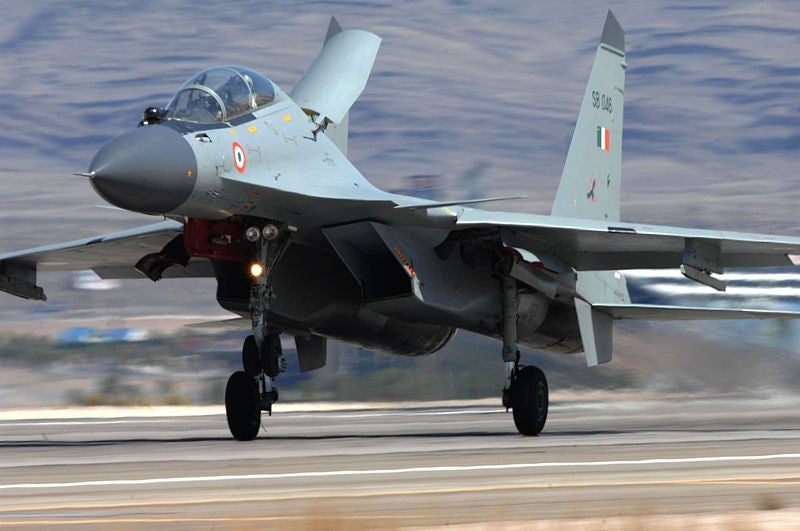 Russia is considering selling a batch of 18 Sukhoi Su-30 multirole fighter aircraft, which were returned by India in 2003.

The 18 Su-30 models were returned by India as the aircraft were not equipped with thrust-vectoring engine nozzles or canard foreplanes.

Military-Technical Cooperation Federal Service deputy director, Alexander Fomin, said: "The 18 Su-30s previously used by India and then returned, are in an aviation repair plant in Belarus and are on sale to potential buyers."

Fomin added that the 18 Su-30 aircraft could be modernised before being sold.

Developed jointly by Russia's Sukhoi and HAL, the multirole, long-range, twin-seater fighters can provide combat agility and manoeuvrability and are armed with precision anti-surface missiles with a stand-off launch range of 120km.

Powered by two AL-37FP thrust-vectoring engines, the aircraft can also be armed with two TV command-guided missiles, such as the Kh-29 (AS-14 Kedge) - with a 317kg penetrating warhead - and the Zvezda Kh-31A, for attaining long-range anti-surface capability.

Capable of providing a combat range of 3,000km on internal fuel, the aircraft's range can be extended to 5,200km with a single in-flight refuelling procedure.

With plans to use the aircraft as one of its main warplanes along with 126 medium multirole combat aircraft and indigenous light combat planes, the Indian Air Force (IAF) intends to increase its Sukhoi Su-30 fighter aircraft fleet to 230 by 2015.

In December 2011, Russia has signed a preliminary deal with India to sell 42 Su-30 MKI frontline jets in kit form and provide technical assistance during their production.

India's HAL Aeronautics has produced around 140 Su-30MKI aircraft under licence.