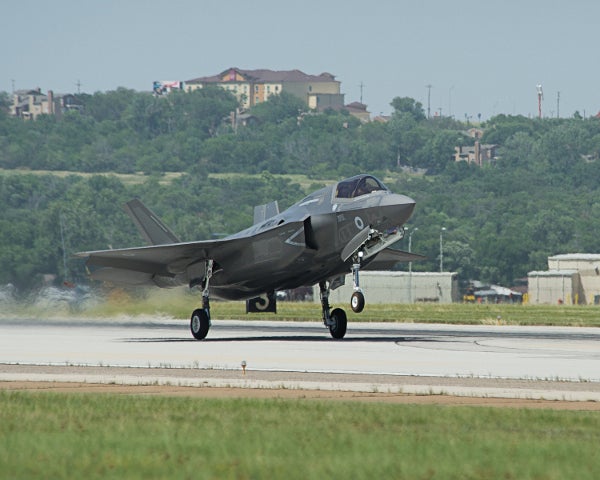 Speaking at the Royal United Services Institute’s 2013 Air Power Conference, Dalton said the squadron will initially disband in April 2014 as part of the planned Tornado GR4 Force drawdown, and will subsequently reform with both the RAF and Royal Navy personnel to receive the aircraft in 2016.

”I am delighted to announce that 617 Squadron’s outstanding contribution to the UK’s air power, past and present, will unequivocally continue when it reforms as the UK’s first operational F-35B Lightning II squadron,” Dalton said.

”The Lightning’s state-of-the-art stealth and precision target capabilities and the battle-proven Typhoon Force will complement each other and set the baseline for UK combat intelligence, surveillance, target acquisition and reconnaissance air power as a contemporary global force for the 2020s and beyond.”

"The Lightning’s state-of-the-art stealth and precision target capabilities and the battle-proven Typhoon Force will complement each other and set the baseline for UK combat intelligence, surveillance, target acquisition and reconnaissance air power."

Also known as the ‘Dambusters’, No. 617 Squadron is based at RAF Lossiemouth in Scotland, and currently operates the Tornado GR4 for ground attack and reconnaissance missions.

The squadron is scheduled to be similarly jointly manned, despite carrying a Royal Navy squadron number.

The aircraft is scheduled to be jointly operated by the RAF and Royal Navy from the Queen Elizabeth Class aircraft carriers, which are currently under development, and RAF Marham in Norfolk, UK, from 2018.

Lockheed has to date delivered the UK’s three F-35B aircraft, which are currently stationed at Eglin Air Force Base in Florida, US, for pilot training programmes.