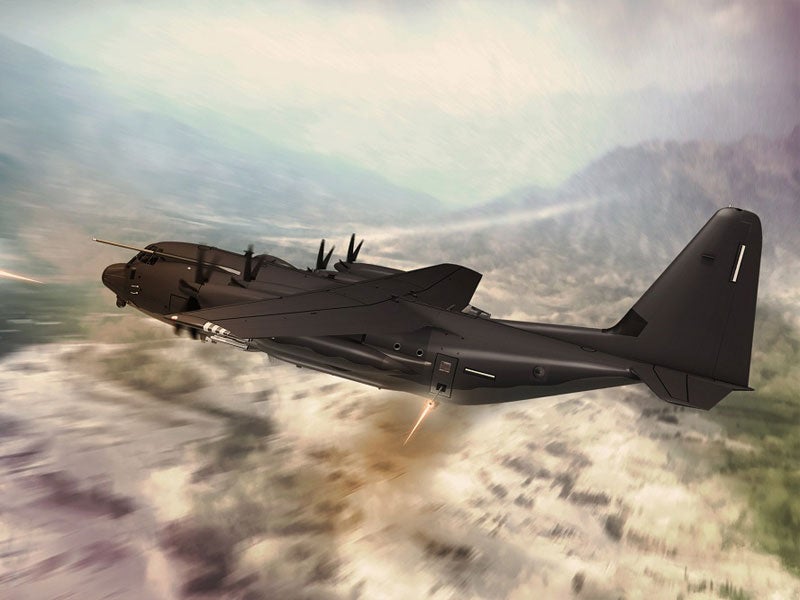 C-130J-SOF is a special mission aircraft developed by Lockheed Martin to meet the requirements of the international military special operations forces (SOF). It is the newest member of the Super Hercules family of military transport aircraft. Lockheed Martin introduced the aircraft at the Paris Air Show held in June.

Design and features of the special mission aircraft

The C-130J-SOF is based on the airframe of the C-130J Super Hercules military airlifter. It is the tenth production version of the Super Hercules. It will integrate a range of mission equipment and systems to meet the special mission needs.

The aircraft will be fitted with lower fuselage protection system integrating a removable specialised protective material to avoid damage to the exterior of the fuselage and other critical systems.

The aircraft will be equipped with an enhanced cargo handling system (ECHS) to enable the precision air drop and rapid cargo bay reconfiguration times. It can integrate an Orbital ATK roll-on / roll-off (RO-RO) pallet, and weapons mount to enable the installation of a 30mm gun system.

The other mission equipment and systems aboard the aircraft will include work stations for a combat system operator (CSO) and scanner and external fuel tanks for longer range and endurance. The CSO station allows the monitoring and operational control of the electro-optical (EO) / infrared (IR) and radar systems, defensive aids and refuelling systems.

The chin-mounted gimbal below the nose of the aircraft will house an EO/IR imaging system, which will deliver real-time imagery during day and night for situational awareness and targeting capability. The imagery and data gathered by the turret sensors will be presented on the displays mounted in the CSO station and the pilot front panel.

The C-130J-SOF can be fitted with a refuelling probe and drogue system to refuel tactical aircraft, helicopters and tilt-rotors. The single-point refuelling receptacles will enable rapid ground refuelling operations. The aerial refuelling probe installation system (ARPIS) modifications will further enable the aircraft to receive the fuel from hose and drogue tanker aircraft.

The aircraft will be armed by a 30mm GAU-23 Bushmaster automatic cannon, and AGM-114 Hellfire air-to-surface missiles (ASMs) for a multi-mission, multi-target precision-strike capability. The Hellfire missiles will be attached to the underwing weapons pylon.

The cockpit, under-deck area of the cockpit, augmented crew station area on the flight deck, and the loadmaster station will be equipped with armour protection system to withstand 7.62mm rounds and small arms fire.

The aircraft will be powered by four Rolls-Royce AE 2100D3 turboprop engines, which develop 4,691shp each. Each engine will be coupled to a GE-Dowty Aerospace R391 six-bladed all-composite propeller.