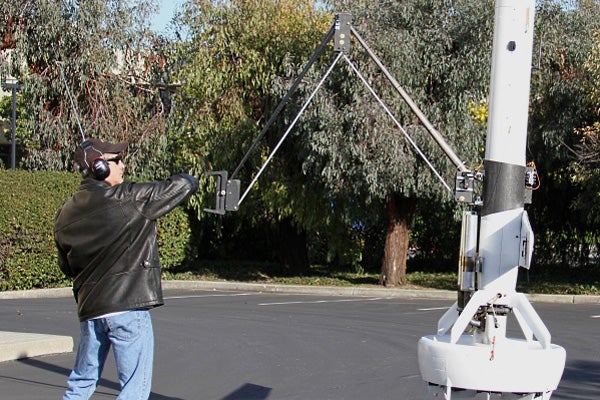 The V-Bat is a vertical take-off and landing (VTOL) unmanned aerial vehicle (UAV) designed and being developed by MLB Company, for the US Air Force (USAF). It is scheduled to enter production in 2015.

The UAV can be deployed in a wide range of missions such as force protection, aerial patrol, search and detection of targets, small unit surveillance, shipboard operation, aerial mapping, urban monitoring, autonomous delivery and placement of payloads, and agricultural and wildlife surveillance. It can also be used for other restricted launch and recovery applications.

T-20 is a medium range tactical unmanned aerial vehicle (UAV) system designed and manufactured in the US by Arcturus-UAV for the United States Armed Forces.

AAI is responsible to develop the system design for low-rate initial production, while BYU will provide control algorithms and assist flight trials.

The UAV has autonomous vertical take-off and landing capabilities and can be launched and recovered in a 3m x 3m area. It offers better situational awareness in urban and confined areas.

The low-cost UAV is 2.7m long and has a maximum gross take-off weight of 60lb. It can carry a maximum payload of 8lb and has an electrical power generation capacity of 150W.

Payloads and sensors onboard V-Bat UAV

The payload system consists of global positioning system / inertial navigation system (GPS / INS) system. An image processing technique is used for target tracking and scene steering. It also consists of an advanced ViewPoint gimbal software to display video and command / control information. The payload can be optionally attached with a laser illuminator and a laser rangefinder.

The vehicle is also equipped with LOS FM data link to transmit command, control and video information up to a range of 35mi.

The V-Bat VTOL UAV is powered by a 157cc, two-stroke engine, which generates an output power of 13hp. The engine uses Mogas 90 octane or higher 40:1 oil mix and has a fuel capacity of 20lb.

The UAV can fly at a maximum speed of 90kts and offers a range of 300mi. It can operate at an altitude of 15,000ft and in wind speeds up to 25kts. It can perform continuous operations for up to eight hours at a speed of 40kts.

This project forms part of our recent analysis and forecasts of the global unmanned aerial vehicles market available from our business information platform Strategic Defence Intelligence. For more information click here or contact us: EMEA: +44 20 7936 6783; Americas: +1 415 439 4914; Asia Pacific: +61 2 9947 9709 or via email.