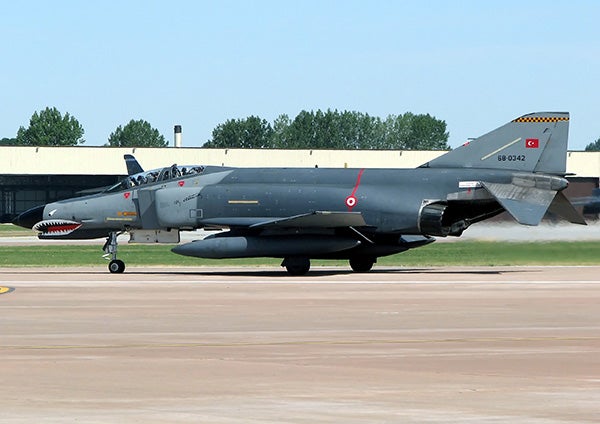 Turkey has pledged to change its military rules of engagement after a Turkish F-4 Phantom jet was shot down by Syrian forces after straying into Syrian airspace.

The jet strayed into Syrian airspace on 22 June 2012, and Syria’s decision to engage has prompted an angry reaction from Turkey’s Prime Minister, Recep Tayyip Erdogan.

"A short-term border violation can never be a pretext for an attack. Every military element approaching Turkey from the Syrian border and representing a security risk and danger will be assessed as a military threat and will be treated as a military target," said Erdogan.

The jet was on a training flight, testing Turkey’s eastern Mediterranean radars, when it is said to have mistakenly entered Syrian airspace. No warning was given before the jet was shot down by an anti-aircraft gun, causing the jet to crash into the Mediterranean ocean. Both pilots remain missing.

Turkey expressed its concerns in a letter to the UN Security Council, in which it described Syria’s actions as a "hostile act by the Syrian authorities against Turkey’s national security." Following a meeting with Nato member states, Nato secretary general Anders Fogh Rasmussen issued a statement, calling the act "unacceptable."

Syria continues to refute its neighbour’s version of events in the lead up to the engagement, with the nation claiming it was unaware that the jet belonged to Turkey and that it had merely engaged an unknown intruder. Turkey responded by claiming to have intercepted radio communications showing that Syrian units were aware of the jet’s origin.

Turkey continued to accuse Syria of further firing upon a search and rescue aircraft despatched to look for the downed F-4, although the attack was unsuccessful.

Whilst Turkey has not requested the UN Security Council to take action and has made assurances that it has "no intention" of entering into a war, tensions between the two nations continue to simmer as fighting escalates within Syria.

Turkey has been welcoming to a number of defectors that have claimed asylum, with the nation accepting a number of high-ranking figures within the Syrian military who defected on 25 June 2012.

Image: Turkey have reacted strongly to Syria’s downing of a Turkish F-4 Phantom, but have made assurances that it is not looking for conflict. Photo: courtesy of Adrian Pingstone.