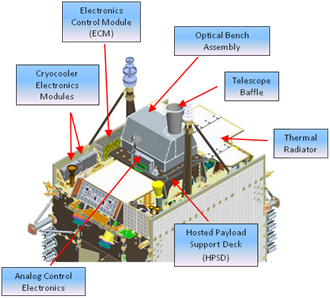 The commercially hosted infrared payload (CHIRP) for the US Air Force (USAF) has completed initial on-orbit testing after it was launched on the SES Government Solutions (SES)-2 satellite in September 2011.

The payload was the first commercially hosted payload and government payload on an SES satellite for the USAF.

Under the CHIRP flight demonstration programme, a new SAIC-designed wide field-of-view infrared sensor will be integrated onto the commercial Orbital Sciences-built SES-2 and will be tested from geosynchronous orbit.

The data gathered will be transmitted to a ground station for analysis, which will illustrate how the USAF and other government customers can gain affordable access to space with the help of a commercial satellite operator.

The CHIRP sensor has a two-year life term and features a fixed telescope that can view one quarter of the Earth from the geosynchronous orbit.

The completion of initial on-orbit testing also marks the beginning of its demonstration period.

SES Government Solutions president and CEO Tip Osterthaler said that utility of the sensor in terms of data, performance validation and interoperability will also be determined and will continue to provide insights into potential future wide field-of-view technologies.

The programme is also being supported by the USAF Space and Missile Systems Center (SMC).

Image Caption: The CHIRP sensor has a two-year life term and features a fixed telescope that can view one quarter of the Earth from the geosynchronous orbit. Image Courtesy: SES Government Solutions.