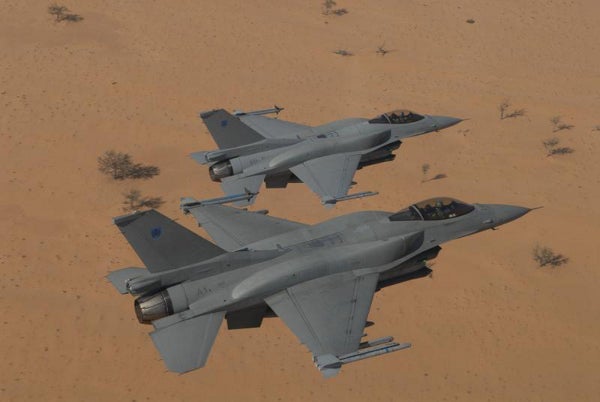 Lockheed Martin has been awarded a contract for the delivery of additional Sniper Advanced Targeting Pods (ATP) to the Royal Air Force of Oman (RAFO), for integration on its fleet of F-16 Fighting Falcon aircraft.

The $23m contract, announced at the 2012 Farnborough International Airshow in the UK, involves the company performing upgrades and supporting the RAFO’s existing pods, in addition to delivering an unspecified number of new sniper pods.

”The outstanding reliability and performance of the sniper pods delivered to Oman under the first contract was a key factor in their decision to acquire these additional pods,” Woods added.

In addition to a laser spot tracker to acquire other laser spots from air and ground assets, the pod includes an infrared marker for soldiers using night vision goggles and a video down link to provide ground forces with enhanced situational awareness.

Additional features include high-resolution, mid-wave FLIR and TV sensors, which are used along with a dual-mode laser, to enable eye-safe operation and precise geo-location in urban environments.

The sniper pods are currently deployed on the USAF and multinational F-16, F-15, B-1, F-18, Harrier GR7/9, A-10C, B-52 and CF-18 aircraft, and have also been used during Operation Iraqi Freedom and Operation Enduring Freedom in Iraq and Afghanistan, respectively.

The Armored and Counter IED Vehicles Market in Saudi Arabia to 2024: Market Brief