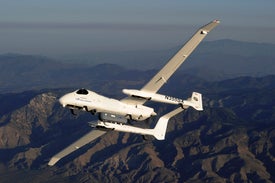 Northrop Grumman’s newly developed SmartNode Pod has demonstrated its transmission capabilities of imagery, video, voice and digital messages during a series of test flights at Mojave in California, US.

Conducted in May 2012, the test flights demonstrated the pod’s ability to transmit encrypted digital data directly to mobile ground units and command centres.

During the demonstration, the pod was flown by the Northrop-built Firebird aircraft, an optionally piloted aircraft, capable of simultaneously operating multiple intelligence, surveillance and reconnaissance (ISR) payloads.

"The pod can connect to the high-altitude BACN platforms, ground operational centers or other pods for beyond-line-of-sight connectivity and access to high-level ISR and command and control information," Hashem said.

SmartNode Pod has been developed using the US Air Force’s (USAF) Battlefield Airborne Communications Node (BACN) technology, which enables the real-time exchange of information between military and commercial radios, while relaying full-motion video, a critical capability for deployed warfighters.

The pod has been designed for use onboard a range of aircraft, which will be required to support the US Department of Defense’s intended high-capacity communications network management system, called the Joint Aerial Layer Network (JALN).