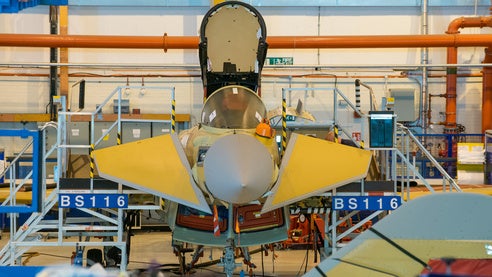 BAE Systems is planning to conduct an initial test flight of the first Tranche 3A Typhoon multirole combat aircraft between September and October 2013.

Currently stationed at the company’s paint shop facility, the aircraft is scheduled to undergo a series of engine ground runs at its sound-proofed engine testing facility over the next few weeks.

Designated as the BS116, the aircraft features more than 350 modified parts designed, engineered and assembled ready to integrate the most advanced capability enhancements.

The improvements include provision for conformal fuel tanks, a fuel dump system that will increase the aircraft’s endurance, and extra electrical power and cooling to cater for an E-Scan radar, which is designed to enhance its performance, reliability and availability, while reducing support costs for customers.

" The aircraft features more than 350 modified parts designed, engineered and assembled ready to integrate the most advanced capability enhancements."

Additionally, the integration of extra computing power and high speed data network systems is expected to provide the aircraft capacity with more capability in the future.

A total of 112 aircraft had been ordered by the four Eurofighter partner nations, Germany, Italy, Spain and the UK, as part of the €9bn Tranche 3A contract in June 2009.

Of the total aircraft, the company will deliver approximately 40 aircraft to the UK Royal Air Force (RAF), 31 to Germany, 21 for Italy and 20 to Spain.

Deliveries of Tranche 3 Typhoons are expected to commence in late 2013.