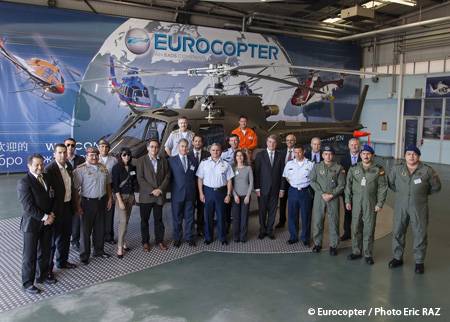 The Ecuadorian Ministry of Defence (MoD) has taken delivery of the first two AS550 C3 Fennec helicopters from Eurocopter at its Marignane facility in southern France.

The delivery follows a contract secured by the company in 2010 for the supply of seven AS550 C3s along with two AS350 B2 Ecureuil helicopters to help replace the Ecuadorian Air Force and Army’s ageing fleet of Gazelle and Lama helicopters.

"Our Air Force will have a new generation of helicopters with higher performance levels and lower maintenance costs," Carvajal added.

Eurocopter Latin America sales vice president Rodolphe Henry said: "The new helicopters are perfectly suited to the operational requirements of the Ecuadorian Air Force and will undoubtedly help to ensure the success of the different missions to which they are assigned."

The new helicopters are scheduled to be operated by the Air Force for a broad range of operations, including reconnaissance, search and rescue, drug enforcement, as well as border patrol missions from Manta Air Base in Porto Viejo, Ecuador.

Powered by a single Turbomeca Arriel 2D engine, the Eurocopter AS550 Fennec is a lightweight, multi-purpose military helicopter designed for conducting troop transport and casualty evacuation in extreme and harsh climatic conditions.

The AS350 B2 helicopters have already been handed over to the MoD in December 2011, while the remaining AS550 C3 Fennecs are scheduled for delivery at a rate of two per year until 2015.

Image: The Ecuadorian and Eurocopter officials during AS550 C3 Fennec helicopter had over ceremony in France. Photo: courtesy of Eric Raz, Eurocopter.