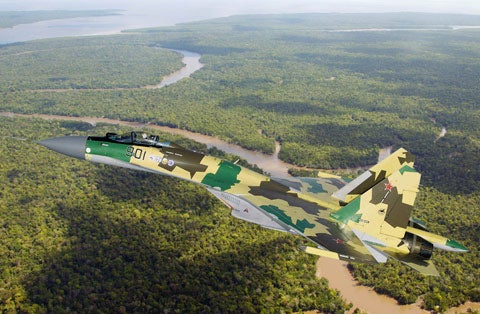 A total of 24 advanced Su-35 fighters will be supplied to the People’s Liberation Army Air Force (PLAAF) under the potential $1.5bn contract.

Details of the agreement were discussed by Russian defence minister Sergey Shoygu and Chinese president Hu Jintao during a recent meeting held in Beijing, as reported by Taipei Times.

In March 2012, an undisclosed defence industry official was cited by Russia’s local daily Kommersant as saying that both parties initially agreed on the sale of 48 Su-35 aircraft under a $4bn deal.

The Su-35 sale, originally requested by China in 2011, was denied by the Russian Government fearing reverse engineering and copying of the fighter, similar to that of the Su-27SK aircraft.

Moscow alleges that China reverse engineered the Su-27SK and secretly developed an indigenous variant, the J-11B, after securing a $2.5bn production license to build 200 Su-27SK aircraft, dubbed the J-11A, using Russian-supplied kits in 1995.

The contract was cancelled by Russia following the delivery of 95 aircraft in 2006 after it discovered the development of a J-11B by Shenyang Aircraft with Chinese-built avionics and weapons.

Designed by Sukhoi and manufactured by KNAPPO, Su-35BM is based on the Su-27 and developed as an advanced capability air superiority fighter to simultaneously engage multiple air targets using both guided and unguided missiles and weapon systems.

The aircraft is powered by two Saturn/UFA AL-31F 117S turbofan engines and also features a range of long, medium and short-range weapons and guided aerial munitions for anti-radar and anti-ship operations.