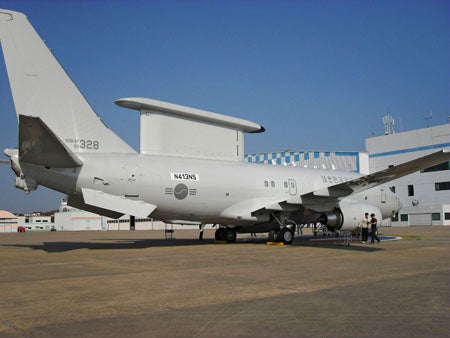 The Republic of Korea Air Force (ROKAF) has received its third Peace Eye 737 airborne early warning and control (AEW&C) aircraft from Boeing at ROKAF Base Gimhae, South Korea, ahead of schedule.

The third Peace Eye is the fleet’s second aircraft to be modified into an AEW&C configuration by Korea Aerospace Industries (KAI) at its Sacheon facility, South Korea.

The 737 AEW&C, capable of flying at a maximum altitude of 41,000ft and a top speed of 340kt, will help airmen to select coordinates and flight path data, and transfer the information to commanders.

The aircraft deployment will not only allow the mission crew to direct offensive and defensive forces but also help maintaining continuous surveillance of the operational area.

Boeing’s 737 -based AEW&C aircraft are also being produced for the Australian and Turkish Governments.

The fourth and final aircraft is currently being modified by KAI and is scheduled for delivery to ROKAF in 2012.