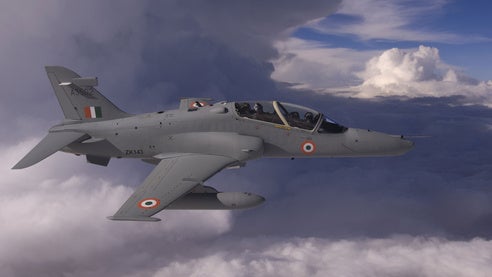 The agreement has been expanded to meet the IAF’s virtual training system (VTS) requirement, as outlined in a formal request for proposal (RFP) by Hindustan Aeronautics Limited (HAL) in September 2012.

The agreement was originally signed by the companies in response to the air force’s initial RFP in 2009.

"The agreement was originally signed by the companies in response to the air force’s initial RFP in 2009."

As part of the agreement, the companies will integrate synthetic radar, electronic warfare, countermeasures and weapons into the Hawk Mark 132 mission system architecture, to revolutionise the IAF’s pilot training system.

Issued in anticipation of a potential IAF contract for licensed production of 20 Hawk AJTs, the RFP also included delivery of equipment and support services for the aircraft.

The aircraft are scheduled to be manufactured at HAL’s facility in Bengaluru, India, and are intended to address requirements of the service’s Surya Kiran Aerobatic Team (SKAT), which was grounded in 2011 due to the requirement of its Kiran Mk II aircraft for cadet training.

Representing the third IAF order presented to BAE, the yet to be awarded contract along with previous awards in March 2004 and July 2010 will cover a total of 123 Hawk trainers.