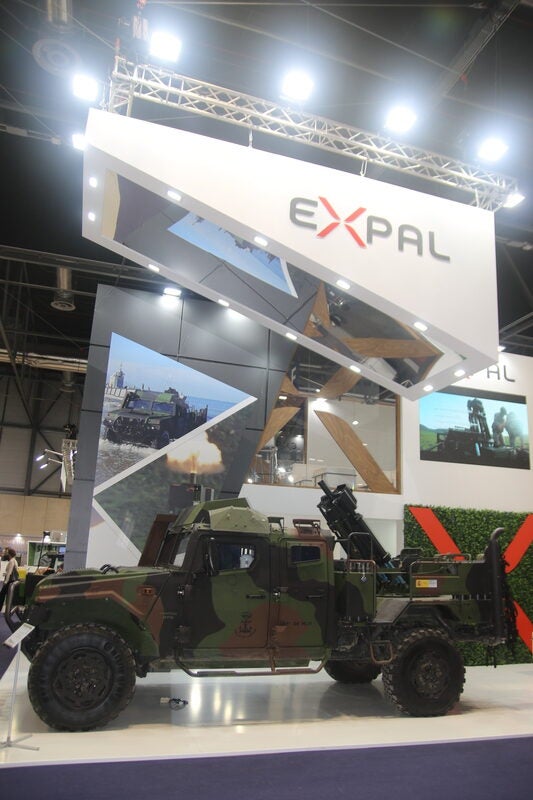 EXPAL presents its solutions for the future of the Armed Forces of Land, Sea and Air Armed Forces at the International Defence and Security Exhibition FEINDEF, taking place in Madrid between 3 and 5 of November.

The company is showcasing its technological capabilities and its commitment to the modernisation of the Armed Forces through collaboration programmes with the Ministry of Defence.

EXPAL highlights the presentation, for the first time, of the dual EIMOS Prototype from the Spanish Navy, available to be visited at EXPAL Stand 10E09 during the Exhibition. This 81mm Onboard Mortar System has been developed through an R&D Programme
with SDGPLATIN, following the most demanding requirements of the Navy (Marine Corps).

The R&D Programme concluded last April, and the first batch of Onboard Mortar System are expected to be delivered in the coming months. Dual EIMOS stands out for having been designed for Shoot & Scoot, providing mobility, automatic 360º aiming and firing without the need for additional stabilizers, the ability to overcome steep slopes and, as a unique feature, deep fording without preparation.

It is worth highlighting the Experimental Exercises carried out in March at the Retín Training Range in Cádiz, coinciding with the final phase of the R&D Programme. In these exercises, carried out by Marine Infantry and Legion troops operating EXPAL’s Embarked Mortars, joint exercises were conducted, demonstrating, in addition to the aforementioned characteristics, the ease of use of the system and its interoperability with other systems, units, command centres and RPAS.

In addition, during 2021, EXPAL Systems has been transferred its EIMOS Light Vehicle Embarked Mortar to the Spanish Army for its evaluation within the framework of the
Force 35 project. The system was delivered to the Legion at the beginning of May, and after fast training, a BRIEX crew operated EIMOS in the presentation of the key programmes and subsequent demonstration of capabilities that the Legion made to The King Felipe VI, during his visit to the “Álvarez de Sotomayor” manoeuvring and shooting range in Viator (Almería) on 27 May.

During the live-fire demonstration, the EIMOS performed an exercise in support of other systems, performing a rapid entry into position, firing and subsequent exit from position (“Shoot&Scoot”).

During November and December, the bulk of BRIEX’s planned testing of the EIMOS system is expected to take place.

On the occasion of the International Defence and Security Exhibition (FEINDEF) in Madrid (Spain), the...