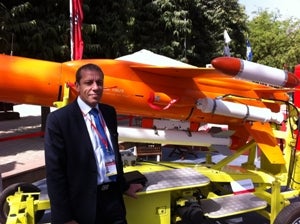 Selex ES, the strategic consolidation of Finmeccanica’s defence and security electronics businesses (SELEX Galileo, SELEX Elsag and SELEX Sistemi Integrati merged in January 2013), is pleased to announce it will be attending Aero India on 6-10 February 2013.

With a fully owned in-country subsidiary, Selex ES brings to the Indian market its state-of-the art portfolio of products and solutions for a wide range of requirements.

Active in India since 1972, Selex ES has collaborated with HAL (Hindustan Aeronautics Limited) and currently with BEL (Bharat Electronics Limited) to supply the country with radar systems and control centres for military air traffic control (ATC), including the 2080C Precision Approach Radar (PAR) system for the Indian Navy and Air Force. The company has also provided a complete communications, navigation, surveillance / air traffic management (CNS/ATM) turnkey system for the two new airports at Bangalore and Hyderabad.

In the naval domain the company’s presence in India dates back to 1984, when it supplied the combat management systems (CMS) for the three ‘Godavari’ class frigates. More recently Selex ES has been awarded a contract to supply the Indian Navy with its 3D L Band Air Surveillance Radar (RAN-40L), which will be installed on-board the new aircraft carrier at Cochin Shipyard.

Through partnerships with HAL and BEL, Selex ES has also supplied HF radios (400W, 1KW and 5KW) for most of the platforms and coastal stations operated by the Indian Navy, which are manufactured in India by HAL under licence. In addition, the company can provide the Indian Armed Forces with integrated combat systems for naval units, C3I and C4I systems based on network-centric architectures, and radar systems for naval, coastal and land applications.

In the airborne domain, Selex ES offers unique airborne sensors and integrated, tailored mission systems, providing access to leading technologies such as AESA radar, new generation defensive aids and state of the art electro-optics sensors to its Indian customers. This capability also allows Selex ES to deliver outstanding, bespoke support and maintenance services to its customers as demonstrated by the 20 year-long CARES support and training contract for the Indian Navy, signed in 2012.

The company, which has been operating its Mirach 100/5 aerial target drone at the national Integrated Test Range since 2007, is also poised to sell complete target drone systems in India. In the avionics field, Selex ES supplies communication (HF, V/UHF) and navigation systems (Doppler GPS) for both rotary wing (ALH, Cheetah, Chetakh) and fixed wing (DO228) platforms manufactured by HAL as well as for MI-8 and MI-17 helicopters and aims to enhance its role of strategic partner for Indian end-users as well as becoming a leading player new generation IFF identification systems and mission support systems (Obstacle Avoidance).

Selex ES is the answer to the ever increasing demands for airborne Intelligence Surveillance and Reconnaissance (ISR). Its flagship Airborne Tactical Observation and Surveillance (ATOS) mission management system is currently operating with seven different customers on nine different platforms. The system can integrate the Seaspray and Gabbiano surveillance radars and situation awareness sensors and can be installed on rotary and fixed wing platforms.

With its unrivalled airborne AESA technology and versatile range of products, Selex ES is the leading European producer of AESA surveillance radar. The company boasts a large, international customer base and counts India among their number, currently fielding its AESA technology with a local in-country partner.

In the secure communications domain, the company is involved in some of India’s biggest tactical communications programmes: TCS (Tactical Communications Systems), BMS (Battlefield Management System) and the Future Indian Soldier. Selex ES has also supplied the protected military communications TETRATAC system to Indian Army through BEL within the framework of a program including the technology transfer to BEL for local manufacturing and maintenance.

Products to be showcased at Aero India

ATOS provides wide area and targeted surveillance (overt or covert), anti-submarine warfare, environmental and border control. It is an advanced, flexible, open architecture mission management system integrating a number of sensors and sub-systems in a highly modular design. ATOS has been selected by six different international customers, and more than 40 ATOS systems have been or are being installed on 10 different platforms.

The Seaspray family of multi-mode AESA radars provides an unrivalled capability as the airborne tactical maritime surveillance primary sensor for fixed and rotary wing aircraft. They use a scalable architecture that shares a set of common modules allowing installation on a wide variety of platforms. Seaspray AESA radars have been selected by the Royal Navy, the Italian Navy, the US Coast Guard, and over 15 international customers. On show: Seaspray 5000E, 7000E and 7500E.

The SEER Radar Warning Receiver (RWR) utilises a digital receiver for advanced situational awareness and is essential for evading threats in a complex hostile environment. Trialled with outstanding operational results and supplemented with a complete support package, SEER can increase mission success and aircraft survivability for a range of new or upgrade programmes, including large transport and small fixed wing aircraft, rotary wing vehicles and Unmanned Aerial Systems (UAS).

SAGE is a digital ESM/ ELINT for Radio Frequency (RF) intelligence, surveillance and reconnaissance missions. Delivering a situational awareness capability, SAGE provides RF signal analysis for intelligence gathering and tactical responses. It has both single and multi-platform geo-location of RF assets, parallel wideband and channelised receivers and delivers instantaneous detection and ELINT analysis. SAGE is suitable for a range of aircraft from tactical UAVs and light helicopters to larger reconnaissance and maritime patrol aircraft.

Wideband Data Link, a new generation high performance Ku-band wide band data link solution for Line of Sight (LOS) links between airborne vehicles (manned and unmanned) and ground stations. WBDL was engineered to satisfy the high demanding NATO STANAG 7085 standard, which has been conceived for Unmanned Arial Vehicles (UAV) applications in the Intelligence, Surveillance and Reconnaissance (ISR) domain. Selex ES has been selected to provide its WBDL-LOS for the NATO Alliance Ground Surveillance (AGS) programme; the system, integrated onboard the Global Hawk HALE UAS, will guarantee broadband, bidirectional data transfer among these components.

Seekers: Data Patterns and Selex ES are collaborating in the production of high performance electro-optical seekers suitable for a range of different guided weapon programmes. These include Infrared Imaging seekers (both cooled and uncooled), Semi-Active Laser (SAL) seekers, dual and multimode seekers. These are all based on proven Selex ES designs, many in service with international missile systems, customised for the Indian market by Data Patterns.

The SKYWARD is a passive radar system operating in the Infrared spectrum, capable to detect the IR radiation emitted from objects and background over a wide angular field. SKYWARD autonomously executes the detection and tracking of multiple targets and provides high resolution IR images of the observed scenarios. SKYWARD is composed of two units: the Electro-Optical Unit (SHU) and the Processor Unit (PU). The SHU can be easily mechanically tailored for installation in the aircraft.

The Mirach 100/5 is a high performance, reusable Aerial Target System which is the standard European Armed Forces threat simulator. It manages up to 8 targets simultaneously in a realistic training scenario and simulates multiple threats flying at high subsonic speeds. The system is controlled by a modern Ground Control Station, allowing mission planning and re-tasking, rehearsal and play back.