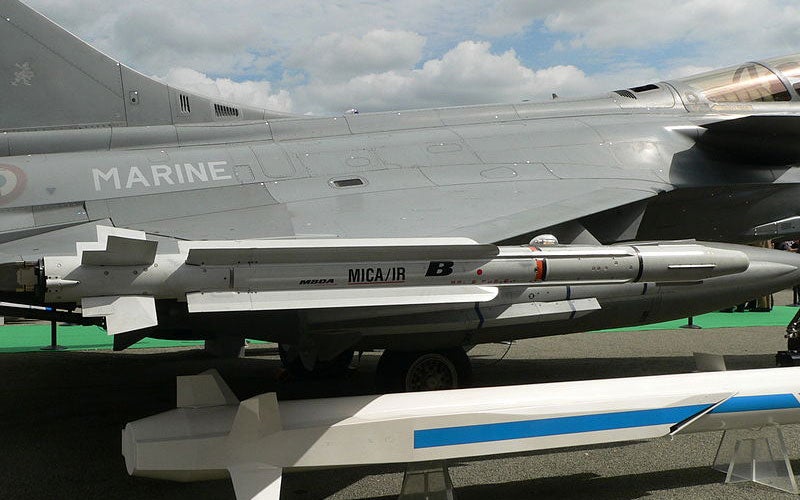 Missile d’Interception, de Combat et d’Autodéfense (MICA) is a solid propellant-fuelled, multi-mission, air-to-air missile that can be integrated onto medium-to-lightweight, modern multi-role combat aircraft such as Rafale and the improved versions of Mirage 2000-5 single-engine fighter aircraft.

It is designed and developed by European missile systems producer, Matra BAE Dynamics Alenia (MBDA), to detect, track and destroy multiple targets beyond the visual range. It is also suitable for short-range combat operations.

The missile is operational with the French Air Force and Navy and has been exported to a number of foreign countries including Taiwan, Qatar, the Arab-Emirates and Greece.

The missile has a length of 3.1m, diameter of 0.16m, and weighs 112kg. It can be launched using rail launch or ejection launch method from an aircraft.

Target designation for the missile is provided by electro-optical sensors, radar and helmet-mounted sight.

The strap-down inertial reference unit is installed to determine attitude and heading information, while the data link carries the updated target information from the carrier aircraft to the missile.

The MICA IR is provided with a dual waveband, passive imaging IR seeker that provides terminal guidance. The active RF, mono-pulse Doppler seeker provides the MICA RF with shoot-up / shoot down capability in all weather conditions.

The air-launched weapon is capable of operating in lock-on before launch and lock-on after launch modes. An infrared search and track (IRST) system in the seeker allows the missile to autonomously detect, track and lock-on the targets.

"The missile is operational with the French Air Force and Navy and has been exported to a number of foreign countries including Taiwan, Qatar, the Arab-Emirates and Greece."

It can be fired from the aircraft at maximum g and maximum angle of attack. Its stealth, multi-shoot, and first-shot, first-kill capabilities provide increased fire power for lightweight fighters.

Up to six MICA missiles can be carried on the medium to lightweight aircraft. The MICA’s minimum and maximum operating ranges are 500m and 60km respectively.

MBDA secured a contract from the Greek Ministry of Defence for the supply of 100 MICA missiles in IR and RF variants in January 2004.

Sagem was contracted by MBDA in June 2012, to provide 200 IR seekers for Mica air-to-air missiles.