Expand
The Modular Space Vehicle, a plug-and-play spacecraft bus, was delivered by Northrop Grumman in February 2014.
The payload components of the MSV spacecraft can be quickly assembled and launched within days.
The payloads of the MSV are assembled on a common payload deck. 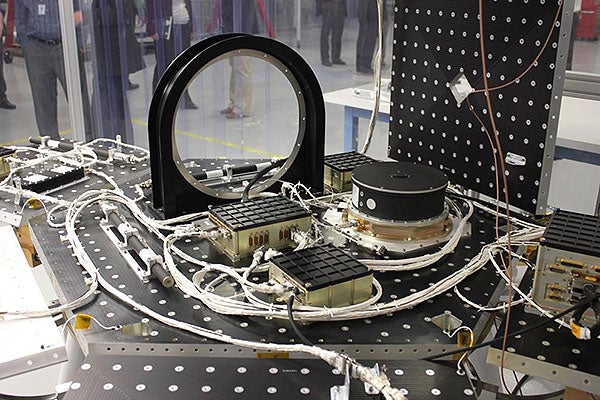 The Modular Space Vehicle (MSV) spacecraft bus, developed by a team led by Northrop Grumman, was delivered to the Department of Defense’s (DoD’s) Operationally Responsive Space (ORS) Office at Kirtland Air Force Base, New Mexico, in February 2014. The MSV will enable small and cost-efficient satellites to be assembled quickly and launched rapidly within weeks for short-term missions.

Nasa, which acted as the contracting agent for the ORS Office, selected ATK Space Systems, Miltec Corporation, Northrop Grumman Systems, PnP Innovations and Sierra Nevada to help develop the multi-mission MSV under a five-year contract awarded in November 2010. The team collaborated with the Air Force Research Laboratory and the ORS Office. The MSV was developed in 30 months with an estimated investment of approximately $50m.

Details of the MSV programme

The MSV programme was launched as part of the larger ORS-2, Tier-2 Enabler Mission which aims to develop, assemble, integrate, launch and operate small satellite systems rapidly and cost-efficiently.

The X-37 is an unmanned demonstrator spacecraft designed and developed by Boeing’s Phantom Works, US, to meet the requirements of the National Aeronautics and Space Administration (Nasa) and the US Air Force.

The preliminary design review (PDR) of the MSV was completed in November 2011, the Critical Design Review (CDR) was completed in June 2012 and the assembly, integration and functional testing of the MSV bus hardware were completed by Applied Technology Associates (ATA) in July 2013.

Details and capabilities of the MSV

The MSV implements a Modular Open System Approach (MOSA) using Space Plug-n-Play Avionics (SPA) to enable rapid manufacturing, integration and testing. The spacecraft bus can be assembled and integrated with the payload in a matter of days.

The MSV is capable of operating in low earth, medium earth and geosynchronous orbits, accommodates payloads for a vast range of missions including radar imaging, missile warning, military communications and weather, and has a life expectancy of one to more than seven years.

It can be launched from launch vehicles such as the Minotaur I and IV, Evolved Expendable Launch Vehicles (EELV) and the Falcon 9. The MSV is also compatible with the EELV Secondary Payload Adapter (ESPA).

The standard plug-and-play interfaces enable the checking of the payloads prior to integration and the spacecraft can use common test equipment for all missions, the flexible power subsystem can be configured for multiple missions by adding or reducing batteries and solar arrays, and the MSV system can accommodate last-minute payload and bus component changes with minimal impact to cost and schedule.

Payloads of the MSV

The equipments of the MSV are assembled on a common payload deck, and the components are all plug-and-play objects that can be freely interconnected. The MSV features a command and data handling (C&DH) subsystem which is comprised of nine flight Applique Sensor Interface Modules (ASIM) and one SPA Spacewire Network router with flight software incorporating a BroadReach processor.

The Space Plug-N-Play Avionics (SPA)-Spacewire (SPA-S) central router and power distribution unit provides a central networking of all units, and the SPA components are connected to the C&DH subsystem through a standard SPA connector or cable.

"The MSV is capable of operating in low earth, medium earth and geosynchronous orbits."

Other non SPA components including star trackers, coarse sun sensors, inertial reference unit (IRU), global positioning system (GPS) and reaction wheels are fitted with an ASIM to electrically connect them to the SPA-S and SPA components.

Batteries are fitted on the payload deck for multi-mission power storage and power is generated by solar panels mounted on its wings.