Expand
An artist's conception of Boeing's X-37 advanced technology demonstrator.
The X-37 is designed to travel to and from the International Space Station carrying supplies and equipment.
The X-37B orbital test vehicle in an encapsulated cell at the Astrotech facility in Titusville, Florida.
The X-37B sits on the Vandenberg Air Force Base runway during post-landing operations 3 December 2010.
The X-37B Orbital Test Vehicle sits on the runway at Vandenberg Air Force Base, California, US, 3 December 2010, during post-landing operations.
X-37B Orbital Test Vehicle during enclosure in its fairing 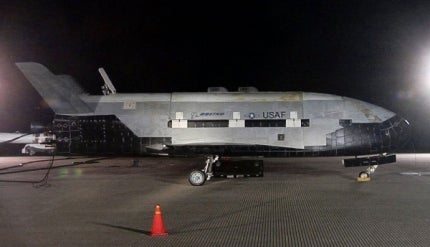 The X-37 is an unmanned demonstrator spacecraft designed and developed by Boeing’s Phantom Works, US, to meet the requirements of the National Aeronautics and Space Administration (Nasa) and the US Air Force. The spacecraft development is part of the Orbital Space Plane programme designed to support the transportation of crew and contingency cargo in Nasa’s International Space Station.

The X-37 is principally used for space exploration, risk reduction and developing reusable space vehicle technologies. It is derived from the X-40A spaceflight and is one of the most modern spacecraft in the world. Fuelled with military fuel JP-8 and hydrogen peroxide, the Rocketdyne engine of the X-37 is designed to run for nine months. The engine installed in the aircraft currently uses hypergolic nitrogen tetroxide or hydrazine.

Boeing Space and Intelligence System division is the key manufacturer of the X-37 orbital vehicle. The construction of composite wings for the X-37 was completed in July 2002. The wings were assembled and tested with fuselage produced by Boeing Phantom works in Palmdale.

The OSP programme was launched in February 2001 with the aim to reduce the space transportation cost and increase safety and reliability. Space transportation systems developed as part of the programme endorses the technologies required for conducting missions to and from the international space station.

"The X-37 is one of the most modern spacecraft in the world."

It is the first experimental reusable launch vehicle used for both orbital and re-entry phases of flight.

The vehicle is designed to reduce the risk of future reusable launch vehicle systems.

The demonstrator can return the experiments to Earth for advance inspection and analysis. The vehicle is more flexible and manoeuvrable as it can be reused for other launches. It is manufactured with light composite structures rather than conventional aluminium.

The spacecraft has been designed to carry out experiments on space for nine months (270 days). The X-37 re-enters the atmosphere from space, falls down and lands on the runway automatically after completing its task.

In an effort to reduce the cost of space transportation, Nasa decided to develop the flight demonstrator vehicle, which tests airframe system technologies such as propellant tanks, thermal protection systems, avionics and structures.

A joint activity agreement was signed between Nasa and Boeing in July 1999 for the development of the X-37 advanced flight demonstrator at a cost of $173m. The project is being financed by Nasa and Boeing.

"The orbital space plane programme was launched in February 2001."

The government funded $40m for developing the flight demonstrator, while the US Air Force provided $16m for manufacturing advanced solar arrays and improved attitude controls needed to enhance the future military spacecraft. Another $67m is being provided by Boeing.

A new $301m contract was awarded to Boeing by Nasa in November 2002 to continue work on the X-37 flight demonstrator.

The contract includes the development of two vehicles – the approach and landing test vehicle (ATOL) / X-37A for Nasa, and the orbital vehicle (OV) / X-37B for the US Air Force. In September 2004, the X-37 was moved to the Defence Advanced Research Projects Agency (DARPA).

The X-37A was released from the B-52 aircraft at an altitude of 40,000ft to examine its descent and landing during the flight test. The vehicle examines technologies, including thermal protection systems, advanced guidance, navigation and control, avionics, high-temperature structures, conformal reusable insulation and lightweight electromechanical flight systems. Five flight tests were completed in 2004.

The maiden flight of the X-37A was completed on 7 April 2006. It was successfully launched into orbit in September 2006 aboard the White Knight carrier aircraft.

The design of the X-37A is the base for the development of X-37B, which is used for demonstrating a reliable, reusable unmanned space test platform for the air force.

"The government funded $40m for developing the flight demonstrator."

The X-37B orbital test vehicle (OTV-1) completed its maiden flight test on 22 April 2010, however minor damage occurred when it took off from the runway during its flight test. It was launched into LEO on the piggyback of Lockheed Martin’s Atlas V rocket from Cape Carnival Air Force Base, Florida, US. The aircraft returned from space to the Vandenberg Air Force Base, California, in December 2010 upon completion of a seven-month voyage.

OTV-2 returned to Vandenberg Air Force Base in June 2012 upon completion of a 469-day mission. The US Air Force launched the third X-37B Orbital Test Vehicle in December 2012.

The X-37 is powered by a single Rocketdyne AR2-3 rocket engine, manufactured by Pratt & Whitney. Each engine can produce a maximum of 29.341kN thrust and uses solar power and lithium-ion batteries instead of the traditional fuel cell system.