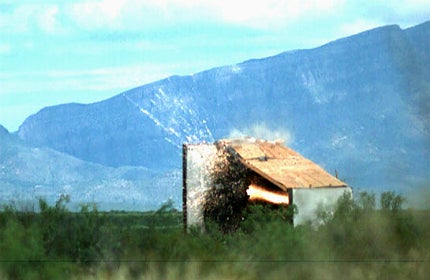 ATK is responsible for the rocket propulsion system, mid-body warhead and fuse applications, while Elbit Systems supplies seeker and guidance equipment. The rocket is being advertised in the UK by Ferranti Technologies.

GATR is designed to destroy toughened targets while minimising collateral damage. It can be more effective in air-to-ground or ground-to-ground operations against lightly armoured targets, as well as quickly moving and stationary targets.

GATR can be launched from fixed wing platforms, rotary wing platforms and ground platforms. The rocket is also compatible with existing 70mm launchers.

The system can be used in urban environments due to its precision and less indirect damage.

GATR is being developed as part of the Defence Acquisition Challenge (DAC) programme to supply the US Special Operations Command (USSOCOM) with an affordable and lightweight guided missile / rocket.

ATK systems and Elbit Systems received a $3.2m contract in April 2013 to provide an affordable and lightweight guided precision rocket and precision guided rocket launcher (PGRL) to the USSOCOM for evaluation.

GATR uses the laser reflected from the surface of the target to locate the target precisely. It carries an SAL seeker in its nose section for guidance.

The laser light is imposed on the target by a source off board. The laser transmitter source can be on the ground or an aerial source.

GATR employs foldable canards for steering. It features automatic locking of the target before or after firing.

GATR carries a digitally fused M282 multipurpose penetrator warhead. The M282 is encased in steel and weighs 13lb. The warhead enables the GATR to penetrate semi-armoured targets and hard targets.

The super quick detonating mechanism is employed against soft targets. The delayed fuse is helpful in case of hardened targets, allowing the missile to explode the warhead after penetration into the target.

PGRL is a digital launcher and is available in three, seven and 19-tube variants. It can also launch unguided rockets, such as Hydra. It can be incorporated onto fixed wing and rotary wing platforms and is compatible with prevailing digital and analogue fire control systems. PGRL is equipped with digital stores management for loaded artilleries.

GATR can destroy targets in a range of eight kilometres when deployed from rotary wing air platform and 15km, when fired from a fixed wing platform. The system can be used in day and night operations as it employs laser guidance system.

The sophisticated insensitive munitions of the GATR system enable the rocket to withstand mechanical shocks and fire during transportation. The system offers better stand-off range and enhanced off-axis capacity.

Forecast spending for 2012 has been lowered as government officials confirm the UK will pull out of Afghanistan by 2014.The AGM-88E AARGM is a medium-range air-to-ground missile developed by Alliant Techsystems (ATK).