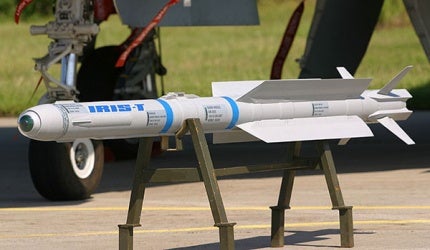 The IRIS-T entered service in December 2005 with the air forces of participating programme nations including Germany, Greece, Italy, Norway, Sweden and Spain. The export customers of the IRIS-T are Austria, South Africa, Saudi Arabia and Thailand.

The IRIS-T is integrated on the Eurofighter Typhoon, F-16 Falcon, F/A-18, Tornado and Gripen fighter aircraft.

Variants of the IRIS-T missile

"The IRIS-T variants are tailor-made for a variety of carrier platforms conducting air, ground and naval operations."

The IRIS-T SL is an upgraded variant with enhanced rocket motor for extended range. It can be easily integrated with existing and future air defence systems. IRIS-T SLS is a vertically launched variant which uses the same IRIS-T missile.

The IRIS-T variants are tailor-made for a variety of carrier platforms conducting air, ground and naval operations.

Development of the air-to-air guided missile

"The missile is intended to replace AIM-9 Sidewinder missiles used by the Nato member countries."

The first IRIS-T missile fired from an F-4F acheived a successful hit in March 2002. In October 2003, Diehl BGT received the final approval from the Federal Office for Military Technology and Procurement (BWB) to start the preparations for series production. In December 2004, the BWB on behalf of all six European nations involved, placed a €1bn contract with Diehl for series production of the IRIS-T missile.

The first export customer, the Austrian Armed Forces, placed a contract for IRIS-T missiles at the end of 2005.

In May 2008, South Africa awarded a contract to Diehl for the supply of IRIS-T missiles for its Gripen aircraft.

In September 2009, Diehl received a contract from Saudi Arabia to deliver IRIS-T missile for the integration on Eurofighter Typhoon and Tornado combat aircraft of the Saudi Air Force.

More than 4,000 IRIS-T missiles initially ordered by the consortium are scheduled to be delivered by the end of 2012.

Design and features of the air-to-air guided missile

The main segments of the missile include the guidance section, warhead, rocket motor and control section with fins and jet vane.

The missile has an overall length of 2.94m, a body diameter of 127mm and a total weight of 89kg. It is equipped with both lock-on before launch (LOBL) and lock-on after launch (LOAL) capabilities for successful target engagement.

It can intercept flying targets within a range of 25km.

IR seeker and warhead system of the IRIS-T

The missile offers 360° degree defence capability due to its very large look angle and targets can be assigned by the airborne radar or the helmet mounted sight.

The IRIS-T is equipped with a proximity fuse and a high-explosive fragmented war head delivering anti-missile capability against incoming missiles. The lock-on-after launch feature allows the engagement of targets in the rear hemisphere.

The IRIS-T missile is propelled by a solid propellant motor, developed by Nammo.The propulsion mechanism provides the missile with a maximum speed of Mach 3 and the thrust vector control module enables the missile to engage targets behind the firing aircraft.