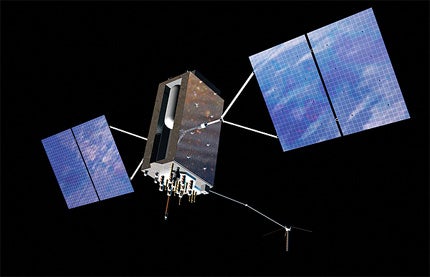 GPS III (Global Positioning System III) is a military communication satellite designed and being manufactured by Lockheed Martin Space Systems (LMSS) for the United States Air Force (USAF). It will supersede the existing GPS constellations used by military and civilian customers worldwide. The spacecraft is scheduled for launch atop either the Atlas V (401) or Delta-4M+ (4.2) vehicle in 2015.

The satellite will provide modern anti-jam potentialities, superior system security, accuracy, reliability and meliorated position, navigation and timing (PNT) services. The integration of an international civil signal (L1C) will allow the spacecraft to be interoperable with global navigation satellite systems.

LMSS was awarded a $21.5m contract by the USAF in January 2012 to execute launch and checkout capability (LCC) for all GPS III satellites. The first satellite is expected to be delivered in mid-2014.

Orders and deliveries to the United States Air Force (USAF)

LMSS secured two fixed-price contracts worth $120m from the USAF in February 2013 to begin work on the next four GPS III satellites. It received over $200m funding in December 2013 to complete the fifth and sixth GPS III satellites, and expects to secure funding for the seventh and eighth satellites in 2014.

LMSS is planning to build up to 32 GPS III space vehicles.

The GPS III is designed for a lifespan of 15 years. It will weigh around 3,680kg at launch and consume 15kW of power. The spacecraft is designed to deliver three times higher quality signals and three times more power compared with conventional GPS constellations.

Four unfolded 307ft² highly efficient UTJ solar arrays will be attached to the central core structure to provide electricity during power failure. The spacecraft will be made up of lightweight composite materials to maximise strength, minimise thermal distortions and decrease launch costs.

Use of Skunk Works’ A2100 satellite bus

GPS III will use the A2100 satellite bus, a fully redundant flight proven spacecraft bus designed and being built by Skunk Works at the Astro Space East Windsor facility, in New Jersey.

The ground control station (GCS) of GPS III will be equipped with operational control segment (OCX) to supervise and support the current and future GPS constellations. Communications between the GCS and the spacecraft will be enabled through the NCE.

The satellite will be tracked and controlled by a telemetry tracking and command (TT&C) system. It will be incorporated with a space ground link system, enhanced crosslink transponder subsystems, onboard computer and mission data unit.

"It will supersede the existing GPS constellations used by military and civilian customers worldwide."

ATK was contracted in April 2010 to supply the A2100 composite satellite structures and ship set of propellant tanks for the spacecraft.

LMSS first core structure and ship set of propellant tanks at the John C. Stennis Space Center in August 2011 for integrating the spacecraft’s flight propulsion system. The integrated propulsion model will be transported to the GPF to carry out final assembly and testing for its planned 2015 launch.

ITT Exelis was contracted by LMSS in March 2012 to supply navigation payloads for the third and fourth GPS III constellations, for $32m. Honeywell Aerospace will supply the onboard computer, reaction wheel assembly and inertial measurement unit at a cost of $106m.