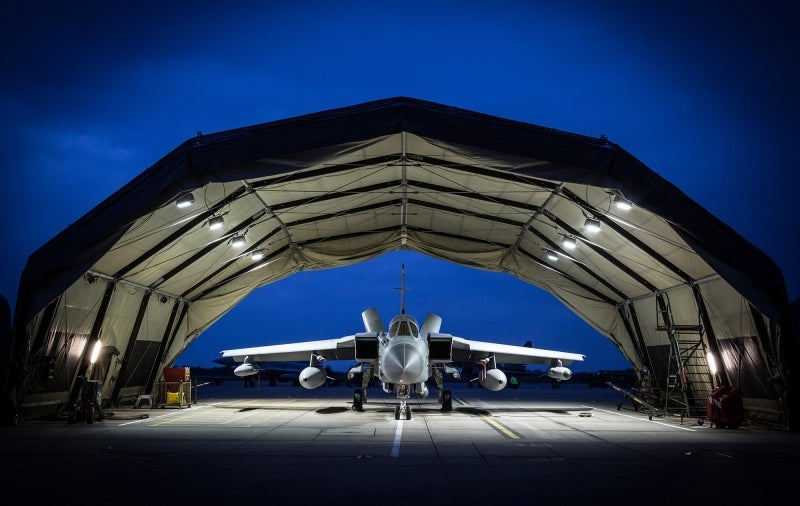 The trial was a success and advantageous to all parties, with the Typhoon Force proving the viability and benefits of utilising small aircraft shelters in military operations. It also provided 5001 Squadron with an invaluable opportunity to train new personnel in TWE construction on a fast jet operating base, while still being within easy reach of home base.

5001 Squadron has supported many UK military operations around the world. The squadron’s core capability, to rapidly construct aircraft hangars and other items of Technical Working Environments (TWE) at austere locations, has been a key enabler for deployed forces and continues to be in high demand. The TWE installations included a large number of Rubb Expeditionary Forces Aircraft Shelter System (EFASS) structures. 5001 Squadron constructed four 20.4m span structures for the ‘BUZZARD’S NEST’ trial at RAF Coningsby.

MoD figures from the ‘BUZZARD’S NEST’ trial revealed that the Rubb shelters help deliver a tangible increase in available sorties (by more than 10%) and a decrease in aborted sorties. The trial reaffirms the belief that TWE substantially decreases the maintenance cost of aircraft and also increases the amount of hours aircraft can fly due to less maintenance downtime.

Rubb managing director Ian Hindmoor said: "Once again we are extremely proud that our Rubb Military aircraft shelters have played a key role in supporting UK defence operations. This trial proves that use of TWE is helping to decrease aircraft maintenance costs and maintenance downtime. We will continue to improve our hangars and services to ensure the best value and product lifetime cost savings for our clients."

The Rubb Military team will be highlighting all the latest product developments and project news at Stand 06-A31, UK Pavilion, IDEX 2017, ADNEC, Abu Dhabi, from 19-23 February.

Rubb sales manager Andy Knox said: "There is significant interest in our hangar systems in the defence sector in the Middle East, with a growing emphasis on expeditionary and surveillance operations.

"We have noted growth in procurement activity for fast jets and rotorcraft, and in turn we have seen enquiries regarding our rapid deployment hangars grow in areas such as the UAE, Saudi Arabia, Iraq, Oman, Kuwait and Qatar. We are interested in exploring these opportunities further and meeting potential new clients, as well as some familiar faces at IDEX."