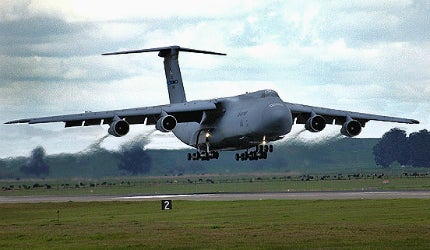 Travis Air Force Base (IATA: SUU) is situated five kilometres east of the central business district of the city of Fairfield in Solano County, California. It is owned by the United States Air Force (USAF) and operated by Air Mobility Command (AMC). Approximately 15,280 personnel reside at the base.

History of the United States air base

A proposal to build the army airfield near Fairfield and Suisun City was first advocated in December 1941 after the Japanese attack on Pearl Harbour. Construction of the airfield commenced in June 1942 under the designation Fairfield Suisun Army Air Base (FSAAB). The air transport command (ATC) was the first to be officially deployed at the base by the War Department in May 1943.

The FSAAB was officially opened in June 1943 to deploy various bombers and transport aircraft to the Pacific warzone. It was renamed as the Fairfield Suisun Air Force Base in January 1948. The control over the base was transferred to the military air transport service (MATS) in June 1948.

The base was reassigned to the strategic air command (SAC) in May 1949, transforming it into a long range reconnaissance and intercontinental bombing installation. It was formally renamed as Travis Air Force Base in April 1951 in the honour of Brigadier General Robert F. Travis, who died in a B-29 Superfortress aircraft crash in August 1950.

Design and construction of the USAF facility

A new two-storey maintenance hangar was designed and built at the base by TranSystems for C-17 and KC-10 aircraft. The 101,700 square feet hangar features high-intensity discharge (HID) lighting, radiant heating and ventilation, as well as a large expansion foam system.

"Travis Air Force Base (IATA: SUU) is situated five kilometres east of the central business district of the city of Fairfield in Solano County, California."

TranSystems also designed the Fire Crash Rescue Station to render fire fighting and fire protection services for the base facilities.

The station is equipped with fire-fighting components, central station crew, a central fire alarm system and command and control systems. A C-17 Globemaster aircraft parts store and engine storage facility was also built on a 64,000 square feet site at the base.

Construction of the first airstrip and temporary buildings commenced at the base by the US Army Corps of Engineers in 1942.

Various facilities, such as hangars, runways, permanent barracks and family housing units, were built between 1949 and 1958. The childcare development centre, army and air force exchange system were built in 1995.

Renovation of the dormitory campus began in 2009 at a cost of $6m and was completed in 2011. In February 2012, the Travis Air Force Base experienced some demolition to create a recreational area for the military families.

The 349 AMW was activated at the base in July 1969 to carry out passenger or freight transportation, air refuelling and aeromedical evacuation operations. It is organised into four groups, namely the 349th Operations Group, 349th Maintenance Group, 349th Mission Support Group and 349th Medical Group.

Air facilities at the Californian base

The base has two runways surfaced with porous European mix (PEM) and concrete.