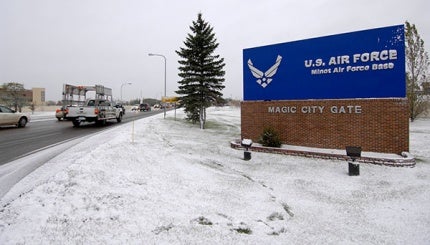 Minot Air Force Base (IATA: MIB) is a US Air Force installation located about 21km north of the city of Minot in Ward County, North Dakota. The base is spread over an area of about 5,000 acres.

The base is home to 13,000 people including military personnel and families, DoD civilians, and retired personnel. It houses the 5th Bomb Wing (5th BW) and 91st Missile Wing of the Air Force Global Strike Command (AFGSC).

"The base is home to 13,000 people including military personnel and families, DoD civilians, and retired personnel."

The idea to set up a base in the Northern United States was conceptualised in the early 1950s. The area near Minot was preferred and land was acquired from the city of Minot in 1954. Construction started in May 1956, and the base was opened in January 1957.

The first unit established at the Minot Air Force Base was the 32d Fighter Group, and it was activated as a Strategic Air Command (SAC) in February 1957. The Base Exchange was opened in September 1958.

The 4136th Strategic Wing was the first permanent SAC assigned to Minot AFB. The 906th Air Refuelling Squadron was also activated in the same year.

The first KC-135A Stratotanker arrived at the base in September 1959. The semi automatic ground environment (SAGE) facility was activated in June 1961.

The first B-52H Stratofortress arrived at the base in July 1961, and the construction on Minuteman I Intercontinental Ballistic Missile (ICBM) complex began in January 1962. The 455th Strategic Missile Wing was established in November 1962. The first Minuteman I Missile was placed in the launch facility in September 1963.

The 91st Missile Wing and the 5th BW were transferred to the new AFGSC in December 2009 and February 2010 respectively.

Garrison facilities at USAF’s base at Minot

Wright-Patterson Air Force Base (WPAFB) is located in the province of Dayton, Ohio in the US.

The 91st Missile Wing is an ICBM wing at Minot AFB. It is one of the three ICBM wings of the US Air Force. The missile wing is responsible for the operation and maintenance of seven UH-1N helicopters, and Minuteman III missiles in underground launch facilities. The missile complex occupies more than 8,500 square miles.

A new air traffic control (ATC) tower, which is currently under construction, will replace the existing ATC tower located south of the runway. The construction will also include a new base operations building. The facilities are expected to be completed in the summer of 2013.

The Minot AFB has a 4,022m long single runway surfaced with concrete which can accommodate a range of aircraft including B-52H Stratofortress, C-130J Hercules, C-5 Galaxy, C-17 Globemaster III and A-10 Thunderbolt II aircraft. The runway is being reconstructed under a $70m phased project. The US Army Corps of Engineers issued a Request for Proposal (RFP) for the construction of the new runway, in January 2012.

Other base facilities and services

"The Minot AFB has a 4,022m long single runway surfaced with concrete which can accommodate a range of aircraft."

The Minot AFB offers over 2,400 family housing units for officers, and senior and junior enlisted members. It has one of the largest housing complexes of the USAF.