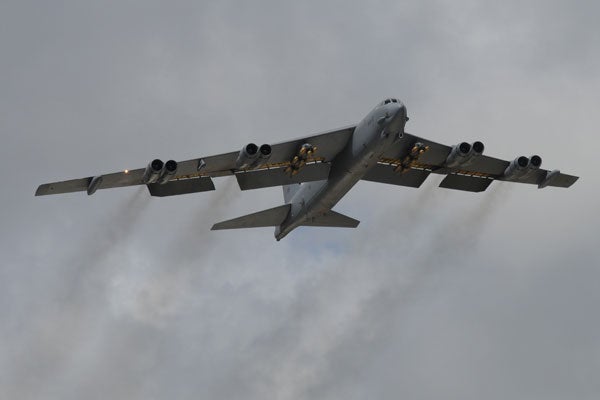 Miniature Air Launched Decoy (MALD) is a small unmanned air-launched flight vehicle designed and manufactured by Raytheon Missile Systems. The vehicle is currently used by the US Air Force (USAF) and the US Navy.

The MALD air vehicle offers superior protection for the aviators and aircraft against air defence systems in combat operations. It also increases airborne electronic attack missions of the US and allied pilots in the battlespace.

The aerial decoy is deployed on the USAF’s F-16 Fighting Falcon aircraft and B-52 Stratofortress bomber.

Raytheon delivered 1,000th MALD-J jammer variant, which uses jamming and radar signature technology, to the USAF under the Lot 5 production contract in May 2014.

The turbojet-powered modular and programmable MALD is launched from fighters as a decoy. It is used to perform counter air operations to inactivate air defence systems.

T-20 is a medium range tactical unmanned aerial vehicle (UAV) system designed and manufactured in the US by Arcturus-UAV for the United States armed forces.

The unmanned air-launched vehicle has a length of approximately 3.04m and weighs less than 300lb. The range of the MALD vehicle is around 500nmi.

The flexible and swing-wing vehicle degrades enemy radars and integrated air defence systems by accurately duplicating all combat flight profiles and radar signatures of the US and allied aircraft in the battlefield.

Development, flight testing and production of the MALD aerial decoy

The USAF awarded a contract to Raytheon for the development of the highly effective ADM-160B MALD flight vehicles in 2003. The vehicles were developed at the company’s facility in Tucson, Arizona.

In October 2006, the USAF and Raytheon demonstrated the MALD system separation from the F-16 Fighting Falcon aircraft during a series of test flights conducted at Eglin Air Force Base in Florida. MALD was also test-fired by B-52 Stratofortress bomber.

The MALD vehicle performed powered flight performance when test fired from the F-16 Fighting Falcon aircraft in June 2007. Flight testing by the government and Raytheon seamless verification team was completed in January 2008. The USAF announced its decision to begin low rate initial production (LRIP) of the decoy in June 2008.

Raytheon received $96.7m from the USAF for third production lot of about 300 additional MALD vehicles in May 2010. The company also agreed to deliver MALD-Js as part of the contract.

Raytheon launched two MALD instrumented shapes from the ramp of a C-130 Hercules equipped with the new Raytheon-funded MALD Cargo Air Launched System (MCALS) in May 2011. The USAF awarded $5m to Raytheon for the conversion of Lot 4 production of the basic MALD platform to the jammer configuration in November 2011.

The ADM-160C MALD-J is a radar jammer variant of the basic MALD aerial decoy and it can operate in both decoy and jammer configurations based on the warfighters’ mission requirements. It adds radar-jamming capabilities to the MALD platform and can perform missions either as a stand-alone system or as part of the constellation.

The unmanned MALD-J stand-in jammer is capable of navigating and operating closer to hostile radars compared to conventional electronic warfare systems, to help aviators and aircraft stay away from enemy’s path.

The USAF awarded a two-year, $80m contract to Raytheon for Phase II risk reduction and critical design review of the highly autonomous MALD-J variant in March 2008. The company was responsible for development, integration and testing of the radar-jamming variant.

In January 2009, Raytheon received a $12.2m contract for feasibility study of increasing power and adding a data link capability for the MALD-J variant. Under the contract, the company integrated a radio frequency data link and more powerful jammer amplifiers into the baseline MALD/MALD-J vehicle.

In September 2011, the USAF conducted the initial test of the MALD-J in a simulated operational environment as part of a Functional Configuration Audit. The vehicle demonstrated its ability to protect manned aircraft during the trails.

Raytheon delivered first eight MALD-J initial operational test and evaluation units to the USAF in September 2011. The USAF authorised a Milestone C decision and approved LRIP of the jammer variant in November 2011.

The engineering, manufacturing and development (EMD) phase and one additional test flight of MALD-J were concluded in March 2012. The initial operational test & evaluation (IOT&E) plan was approved by the Director, Operational Test and Evaluation (DOT&E) in May 2012. The US Navy and Raytheon commenced integration of MALD-Js into the F/A-18 E/F Super Hornets in July 2012.

A total of four jammer variants were launched at the Air Force Operational Test and Evaluation Center in August 2012. Operational testing of the MALD-J began in September 2012.

Raytheon received an $81.7m firm-fixed-price option for the additional production and delivery of MALD-Js to the USAF in April 2013. The contract also includes Lot 6 on the Lot 5 contract of an additional 200 jammers and containers, along with a ten-year warranty.

Raytheon and the USAF completed a four-year development programme of the MALD-J within budget in June 2013.

MALAD is equipped with Hamilton Sundstrand TJ-150 turbojet engine ensuring a maximum speed of over Mach 0.9.