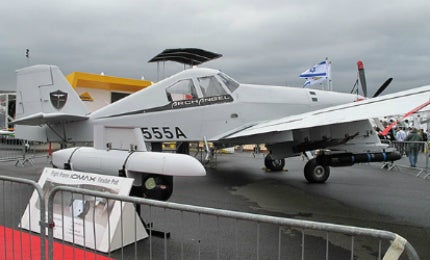 Archangel®, an armed surveillance aircraft manufactured by IOMAX USA, is designed to provide military and special forces with improved precision strike capabilities against fixed and moving targets over land and at sea.

It is the Block 3 evolution of the Air Tractor AT-802 agricultural aircraft and can be deployed in intelligence, surveillance and reconnaissance (ISR), border security, law enforcement, counter-terrorism, maritime patrol, stand-off precision strike, medium / low intensity conflict, and counter piracy, as well as counter-drug, and disaster relief missions.

The aircraft was unveiled at the Paris Air Show 2013 and completed maiden flight in July 2014.

IOMAX received an order from the UAE Special Operations Command for 24 Archangel aircraft in Block 1 and Block 2 configurations in 2009. The first aircraft under the order was delivered in November 2010. The UAE sent its six Block 1 aircraft to Jordan for use in ISR missions in 2013.

The Archangel border patrol aircraft was offered to the Philippines Air Force (PAF) as a replacement of Rockwell OV-10 Bronco counterinsurgency fleet in June 2014.

Design and features of Archangel aircraft

The Archangel border patrol aircraft is based on the Thrush Aircraft’s S2R-660 (710) airframe. It features a large wing area and a fixed, reinforced landing gear, which facilitates safe take-off and landing on unimproved, dirt, grass and gravel surfaces.

The airplane has a length of 11m and a wing span of 17.4m. It can carry 2,177kg of payloads externally, and has day and night operational capability.

A crew of two are accommodated on the airplane in a dual control, tandem seat configuration to render increased visibility.

Six hardpoints, three under each wing, are provided to carry the weapons. The AGM-114 Hellfire missiles can be mounted in the IOMAX Dual Rail Launcher, while the Cirit rockets are stored in a quad pack launcher. The IOMAX Dual Ejector Rack is equipped to carry GBU-58 Mk-81 and GBU-12 Mk-82 laser-guided bombs.

The aircraft also features one centreline hardpoint under the fuselage for mounting additional munitions or reconnaissance / strike / data link pod.

Three 5in x 7in multi-function displays (MFD) and one up front control panel (UFCP) are provided in the front cockpit whereas the rear cockpit is fitted with one 5in x 7in MFD and one UFCP. A mission computer is installed to drive the MFD and the UFCP.

Sensors and survivability equipment aboard the Archangel

The Archangel border patrol aircraft is powered by Pratt & Whitney’s PT6A-67F turboprop engine, which has a generating capacity of 1,600shp. The engine drives a five-bladed MTV-27 MT propeller. Maximum take-off gross weight of the aircraft is 14,800lbs and the fuel capacity is 670 gallons.

The aircraft’s cruise and maximum speeds are 180ktas and 210ktas respectively, while the maximum altitude is 25,000ft above mean sea level, range is 1,350nmi at a speed of 175ktas, and endurance is more than 10 hours.

Military Electronics, Subsystems and Components for the Air Defence Industry