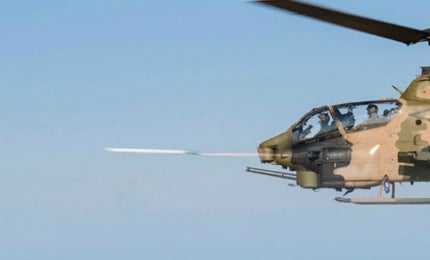 CIRIT is a next-generation, all-up round, laser-guided, air-to-surface missile manufactured by Roketsan.

CIRIT was exhibited at the IDEX 2015 and NAVDEX 2015 exhibitions held in Abu Dhabi, UAE.

Development of the CIRIT air-to-surface missile began in 2004 and its first tests were conducted in 2006. The missile has been in serial production since 2011.

Roketsan placed an order with Goodrich for the production and supply of SiIMU02 inertial measurement unit (IMU) in September 2011.

The first CIRIT missile under a supply contract signed with the Turkish Ministry of Defence was delivered to the Turkish Armed Forces in May 2012.

Tawazun and Roketsan signed an agreement to develop and jointly produce the CIRIT laser-guided missiles for the United Arab Emirates (UAE) Armed Forces in February 2013. More than 1,000 CIRIT air-to-surface missiles have been delivered to the armed forces of Turkey and the UAE as of June 2014.

In December 2011, Roketsan was selected by Eurocopter to supply CIRIT weapons for the EC-635 multi-purpose helicopter.

"Development of the CIRIT air-to-surface missile began in 2004 and its first tests were conducted in 2006."

The CIRIT laser guided missile system features an aerodynamic structure. It can be fired from the standard CIRIT pod and intelligent launch pod developed by Roketsan. The intelligent pod provides two-way data communication and inventory information, which enhances the weapon’s effectiveness.

The missiles can also be fired from a smart launcher with double and quad pack designs and with the MIL-STD-1553 and MIL-STD-1760 military interface.

CIRIT measures 70mm in diameter and 1,900mm in length, and weighs 15kg, excluding the tube assembly. The weapon is stored in a canister and its tube assembly facilitates easy loading and unloading from the canister.

The missile’s front section is equipped with a semi-active laser homing seeker for terminal guidance. Target designation can be provided by the launch platform or from any other designator, which is compatible with the STANAG 3733.

Propulsion and performance of CIRIT missile

The CIRIT laser-guided missile is powered by a solid propellant motor, which uses HTPB-based low-smoke composite fuel. The weapon has a minimum range of 1.5km and a maximum range of 8km.