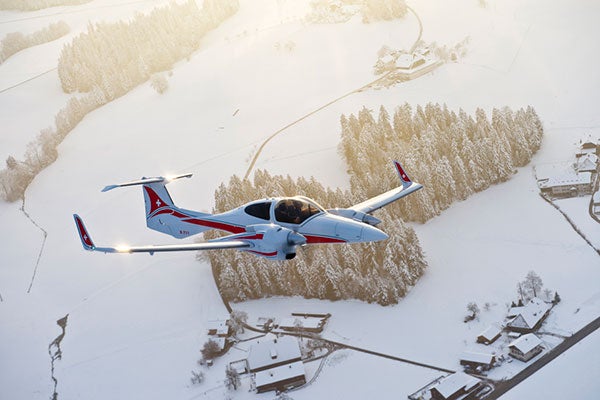 The Diamond DA42 Centaur Optionally Piloted Aircraft (OPA) was designed and manufactured by Aurora Flight Sciences, and is intended for military, intelligence, law enforcement or science-based applications. The aircraft can be operated in manned, unmanned and optionally-piloted / hybrid configurations and is suitable for conducting intelligence, surveillance and reconnaissance (ISR) missions.

The Swiss Department of Defence signed a contract with Aurora Flight Sciences for a Centaur aircraft in January 2012 and took delivery of the aircraft in December 2012.

The Centaur optionally piloted aircraft is designed based on Diamond Aircraft’s twin-engine DA42 multi-purpose platform (MPP) general aviation aircraft. The development of the Centaur began in 2009 and flight trails were commenced in 2010. The first fully-configured Centaur aircraft made its first flight in January 2011.

In October 2011, Aurora Flight Sciences formed a strategic alliance with AAI Unmanned Aircraft Systems for the integration of the latter’s Universal Ground Control Station (UGCS) and other ground control technologies with Centaur aircraft.

The DA42 MPP (Multi Purpose Platform) GUARDIAN is a flexible surveillance aircraft based on the DA42 twin-engine aircraft manufactured by Diamond Aircraft Industries.

The aircraft has a length of 28ft and a wing span of 44ft, and can carry a payload of up to 800lbs. It can accommodate a pilot and up to three passengers in manned configuration. Monitors / laptops are fitted at the back of the front seats.

The aircraft features way point navigation and can be controlled by a single operator with self-deployable systems. The transition from manned to unmanned flight can be performed in four hours. An onboard control station is used to control the Centaur in hybrid mode of operation.

Payloads aboard the Centaur OPA

The Diamond DA42 Centaur aircraft is equipped with a range of payloads for high efficiency operations. An electro-optical (EO) / infrared (IR) video camera is fitted to provide high resolution imagery and video in real-time.

The aircraft can be optionally equipped with a 65kg detachable nose pod and an 80kg belly pod. Pre-installed wiring conduits with sensor payload hard points are integrated in the luggage compartment for avionics.

"The Diamond DA42 Centaur aircraft is equipped with a range of payloads for high efficiency operations."

The unmanned flight of the Centaur OPA can be controlled by a remote ground control system (GCS), which is compatible with NATO STANAG 4586 standard. The GCS allows the aircraft to operate in line of sight (LOS) and beyond line of sight (BLOS) environments.

The Centaur OPA is powered by two Austro Engine AE300 heavy fuel engines, which develop a power of 165.6hp each. The engines can be fitted with special noise and infrared signature reduction kit, while the aircraft is also provided with variable electric power options.

The aircraft can fly at a maximum speed of 175ktas and to a service ceiling of 27,500ft. Its typical cruise speed ranges from 135ktas to 160ktas, and the range is more than 2,000nmi. The aircraft can continuously execute missions for up to one day with a payload capacity of 200lb in unmanned mode of operation, whereas it can endure airborne for up to 12 hours in manned mode.