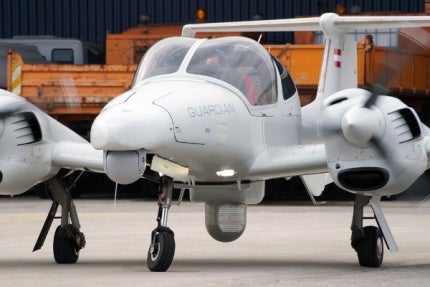 The DA42 MPP (Multi Purpose Platform) GUARDIAN is a flexible surveillance aircraft based on the DA42 twin-engine aircraft manufactured by Diamond Aircraft Industries.

Based on the mission requirements, the DA42 MPP aircraft can be reconfigured to carry different kinds of equipment. The aircraft is flexible for conversion into an unmanned air vehicle (UAV).

The aircraft can be deployed in border surveillance, reconnaissance and geo-surveys, and can also detect drug trafficking, immigration and pollution across the border. Other mission capabilities of the aircraft include ELINT (electronic signals intelligence) and COMINT (communication intelligence).

From 2008 to 2009 The UK Royal Air Force operated two DA-42 MPPs to meet its surveillance requirements.The aircraft was also used by the UK Ministry during the 2012 Olympics.

"The aircraft can be deployed in border surveillance, reconnaissance and geo-surveys, and can also detect drug trafficking, immigration and pollution across the border."

The airframe of the DA42 MPP GUARDIAN is composed of high strength composite materials which can accommodate a maximum of four members depending on the customised configuration required by the mission.

The aircraft’s dimensions feature an overall length of 8.7m with a height of 2.49m, and a wing span of 13.42m. The empty weight of the aircraft is 1,400kg, and it is capable of carrying a maximum payload of 500kg.

Equipment can also be stored in the universal nose of the DA42 MPP, which can carry 65kg of equipment; the nose pod a payload of 85kg, and the belly pod 80kg of cargo.

Two crew members at a time can fit inside the glass cockpit of the DA42 MPP. It is equipped with Garmin G1000 integrated flight instrument system including a primary flight display and a multi-function display. The cockpit features a monitor fixture to install additional monitors and laptops optionally.

The DA42 MPP GUARDIAN is fitted with a mission-specific turret and airborne computer, and carries a variety of sensors which can be loaded and unloaded with ease.

The DA42 MPP can reach a maximum cruising speed of 328km/h TAS (true air speed) but requires a minimum operating speed of 140km/h.

The aircraft requires a 700m long runway for take-off and 570m runway for landing.

The A-50 airborne early warning and control aircraft (AEW&C) was developed and manufactured by the Beriev Aircraft Research and Engineering Complex Joint Stock Company based at Taganrog in the Rostov Region of Russia.

The MC-12W Liberty aircraft is an intelligence, surveillance and reconnaissance (ISR) aircraft of the United States Air Force (USAF) acquired for Project Liberty.