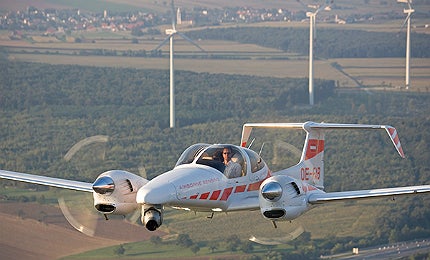 The DA42 Twin Star made its first flight in December 2002. It received the EASA IFR certification in May 2004. DA42 is the first diesel-powered aircraft to perform the non-stop crossing of the Atlantic Ocean.

The Royal Thai Air Force (RTAF) placed an order for six DA42 aircraft in October 2008, for delivery by mid 2009. The aircraft are used to provide sophisticated training for pilots of the RTAF.

“The DA42 Twin Star made its first flight in December 2002. It received the EASA IFR certification in May 2004.”

The DA42 aircraft are produced in different variants according to the requirements of the customers. The DA42 MPP (Multi Purpose Platform) is a multirole aircraft equipped with a high-tech camera system and latest tracking and sensor technology.

Dominator II is an unmanned aerial vehicle variant based on the DA42 aircraft. It was developed by Israel-based Aeronautics Defence Systems. The DA42 NG (New Generation) variant is equipped with more powerful AE 300 engines. The DA42-VI is an improved variant fitted with new propellers, wing fairings and aerodynamic clean-ups.

The DA42 is a twin-engined light aircraft incorporating semi-monocoque fuselage. The structure of the aircraft is made of ultra-light, high-strength composite materials. The low wing cantilever design integrates outboard aerofoils with trim tabs, an inboard split flap and an outboard plain flap. The tail section incorporates a T-tail, elevators and rudder with trim tabs.

Cabin, engines and landing gear of the utility / trainer aircraft

The rear section of the aircraft is provided with spacious split fold-down seats for two passengers. The folding rear seats and four-way baggage area allow the carriage of different payloads with ease. The aircraft also features a large rear door for loading / unloading of bulk cargo.

The aircraft is also offered with other engine configurations. The DA42 TDI model is fitted with TAE Centurion 2.0 Turbo Diesel engines, while DA42 L360 comes with Lycoming I0-360 engines.

The DA42 aircraft is equipped with a hydraulically retractable landing gear. Each landing gear unit is fitted with a single tyre. The robust landing gear offers reliability and low maintenance for the users.

The G120A is a single engine basic trainer and aerobatic aircraft designed and developed by Grob Aircraft of Germany.