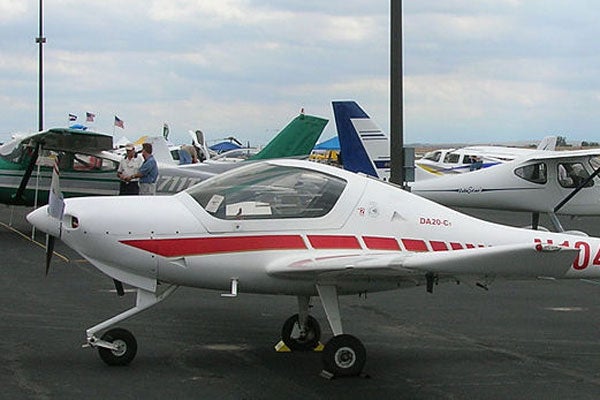 DA20-C1 is a utility and trainer aircraft designed and manufactured by Diamond Aircraft Industries, for military and civilian flight training. Development of the DA20-C1 started in 1998.

The DA20-C1 aircraft have been in service with the US Air Force since 2002 to train the Air Education Training Command cadets.

Diamond Aircraft received a contract from the Ecuador Air Force (EAF) for the delivery of 12 DA20-C1 aircraft and spare parts, in November 2011. The contract also requires the company to provide on-site support, and flight instructor and maintenance training. The EAF received six of the 12 aircraft in March 2012. The aircraft were deployed to train rookie pilots at Cosme Rennella training academy at Salinas Air Base in Salinas, Ecuador.

The DA20-C1 is a new version of the DA20 utility and trainer aircraft and is developed based on the HK36 Super Dimona aircraft. The new version features a damage-tolerant airframe design made of composite construction. It is capable of operating in challenging high density altitude conditions, and requires lesser acquisition and operating costs.

The EMB-312 Tucano is a tandem-seat, single-turboprop basic trainer developed by Embraer for the Brazilian Air Force (FAB).

The easy to maintain aircraft is equipped with low-mounted wings, centre sticks, tricycle spring landing gears, a castering nosewheel and a T-tail. The elastomeric-shock nose and main landing gears can be optionally fitted with aerodynamic wheel fairings.

The utility and trainer aircraft is fitted with a generous baggage area at the rear to accommodate charts, fuel testers, flash lights and aircraft manuals, while additional baggage can also be carried.

The DA20-C1 utility and trainer aircraft is provided with two glass cockpit options – Aspen EFD 1000 and Garmin G500. The aircraft can also be fitted with conventional flight instrumentation.

A GNS 430 GPS/COM/NAV with glide slope is fitted to provide communication and navigation. A STEC 30 autopilot with altitude hold is also fitted to the aircraft. It comprises of a directional gyro with heading bug, GPSS and a NSD 360A Slaved horizontal situation indicator.

"The aircraft can also be fitted with conventional flight instrumentation."

Propulsion and performance of the trainer aircraft

The cruise and stall speeds of the aircraft are 255km/h TAS and 83km/h, respectively, while the range is 1,013km with 30-minute route reserve.

The aircraft can climb at a rate of 5.08m/s at sea level, and has a take-off distance of 390m at ground-roll and of 500m at 50ft obstacle. The landing distances at ground roll and 50ft obstacle are 201m and 414m respectively.