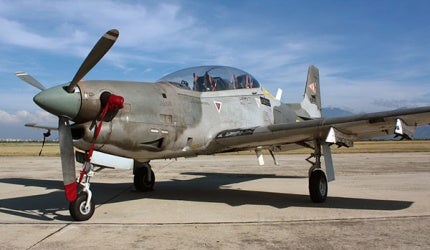 The EMB-312 Tucano is a tandem-seat, single-turboprop basic trainer developed by Embraer for the Brazilian Air Force (FAB). The aircraft replaced the Cessna T-37 in service with the FAB.

The FAB placed a contract with Embraer in December 1978 for two prototypes and two airframes of the EMB-312 for conducting fatigue tests. The first prototype completed its maiden flight in August 1980. The second and third prototypes flew in December 1980 and August 1982, respectively. EMB-312 was named Tucano in October 1981.

The Brazilian Air Force received an initial batch of four Tucano aircraft in September 1983. The aircraft were designed T-27 for training missions and AT-27 for ground attack roles. The EMB-312 Tucano is operated by the FAB from several bases in Brazil for training new pilots, as well as conducting border surveillance, light attack and anti-drug trafficking missions.

The French Government ordered 80 EMB-312s in 1991. Deliveries for the French Air Force were completed in 1994. Tucanos for the air forces of Egypt and Iraq were manufactured in the respective nations under license from Embraer.

The Short Tucano, an uprated version of EMB-312, was selected by the Royal Air Force in March 1985. About 130 aircraft were manufactured by Shorts Brothers. The new version features a strengthened airframe and more powerful Garrett TPE331-12B engine. The RAF received the first batch of aircraft in June 1987. The Short Tucano was also delivered to the air forces of Kenya (12) and Kuwait (16).

The EMB-314 Super Tucano is an enhanced version, with faster speed and higher altitude, of the EMB-312 Tucano trainer aircraft which is operational in the air forces of 17 countries.

The EMB-312 incorporates a conventional cantilever low-wing monoplane design. The airframe is of light alloy construction. The enclosed cockpit accommodates two crew on Martin-Baker ejection seats in tandem configuration. The transparent fibreglass hood on the cockpit ensures broad vision during flight. The aircraft is equipped with a retractable tricycle landing gear.

"The EMB-312 Tucano is powered by a Pratt & Whitney Canada PT6A-25C turboprop engine."

The EMB-312 Tucano can be converted into an armed trainer, air support or air-to-ground attack aircraft by integrating weapon systems. The two hard points under each wing can be fitted with 12.7mm gun, SBAT-70 rocket pod, and general-purpose bombs such as the Mk 81 and the Mk 82.