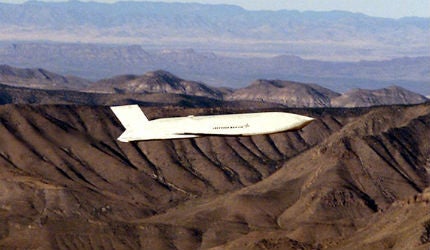 The AGM-158 JASSM (Joint Air-to-Surface Standoff Missile) is an autonomous, long-range missile developed and produced by Lockheed Martin. This conventional, air-to-ground and precision standoff missile was designed primarily for the US Air Force (USAF). The 2,000lb class weapon offers high capability and precision in destroying stationary as well as relocatable targets.

The JASSM has the flexibility to be integrated into various platforms such as B-1, B-2, B-52, F-16, and F-15Eaircraft and is currently deployed on Australia’s F/A-18A/B aircraft and Finland’s F/A-18 C/D aircraft. It offers enhanced survivability, lethality and long-range precision strike to the warfighter during day and night operations.

The JASSM is available in two variants; JASSM and JASSM-ER (extended range). Lockheed Martin will produce about 4,900 JASSMs for the USAF at its Troy manufacturing facility in Alaska.

AGM-158B JASSM-ER is an extended range variant of JASSM. It is intended to fly longer ranges (almost double the range of base JASSM) as it integrates a highly efficient engine and larger fuel tank. The missile can be integrated into B-1 aircraft.

Low rate production of JASSM-ER was authorised in January 2011. The US Air Force successfully completed the initial operational test and evaluation (IOT&E) flight testing of JASSM- ER in May 2013.

"It offers enhanced survivability, lethality and long-range precision strike to the warfighter during day and night operations".

The US Air Force initiated the JASSM development programme in 1996. The programme definition and risk reduction contracts, valued at $128m and $110m, were awarded in June 1996 to McDonnell Douglas (Currently Boeing) and Lockheed Martin, respectively. Lockheed Martin was preferred as the final contractor in April 1998.

The USAF awarded a $132.87m engineering and manufacturing development (EMD) and full-rate production phase contract to Lockheed Martin in November 1998. The EMD contract was extended several times by the US Air Force.

Lockheed Martin received an extension of programme definition and risk reduction contract in support of EMD in March 1999.

A first development test (DT-1) of the JASSM was successfully conducted in January 2001, and the operational capabilities of JASSM were subsequently demonstrated in April 2002. The JASSM proved its ability to perform in the presence of jammers in September 2002. The final development test of JASSM was conducted in March 2003 and the missile was certified for meeting warfighter requirements and operational capability in October 2003.

Lockheed Martin’s JASSM-ER successfully performed its first development flight test in May 2006 and second flight test in August 2006. The USAF awarded a $32m contract in April 2006 for the development of a Weapon Data Link (WDL) capability enabling the JASSM-ER system to engage relocatable targets.

Design features and specifications of JASSM

The JASSM is a stealthy cruise missile integrating flip-out wings and a vertical tail. It is installed with a dual-mode penetrator and blast fragmentation warhead. The missile has a length of 4.35m and weighs approximately 1,000kg. It can carry warheads weighing up to 450kg.

JASSM can cruise with a subsonic speed, and has a range of 370.4km with the ability to reach targets within the range of 926km.

Guidance and navigation features of JASSM

The JASSM flies automatically through a predetermined route by using the onboard inertial navigation system that includes Anti-Jam Global Positioning System (AJGPS), and a ring laser gyro inertial measurement unit.

The J-1000 warhead is designed with a dense metal case, or contains dense metal ballast for maximum penetration. The JASSM is installed with hard target smart fuse (HTSF), which differentiates between the earth, concrete, rock and air. The FMU-156/B fuse used in the warhead of JASSM employs a 150-gram PBXN-9 booster.

A Teledyne J402-100 turbojet engine powers the JASSM, whereas the JASSM-ER is equipped with a Williams International turbofan engine.

Lockheed Martin received a $33.58m contract from Tyndall Air Force Base in January 2002, to supply 76 JASSMs and 84 anti-jam GPS receivers for the JASSM.

"The JASSM is installed with hard target smart fuse (HTSF), which differentiates between the earth, concrete, rock and air."

The US Navy awarded a $53m contract for the integration of its JASSMs on its F/A-18E/F aircraft in May 2003.

In January 2007, Lockheed Martin was awarded with Lot 6 JASSM production contract. The company received a $107m contract from the USAF for Lot 7 production of JASSM in June 2008. A $243.5m contract was awarded for JASSM Lot 8 production in February 2010.

The JASSM has also been selected by the Australian Defence Material Organisation for its AIR 5418 follow-on standoff weapon (FOSOW) programme.

In December 2012, Lockheed Martin was awarded a $5.1m contract for the integration of JAASM onto Finnish Air Force F-18 aircraft. A follow on contract of $34m was awarded in June 2013.

The AGM-154 Joint Standoff Weapons (JSOW) is part of a family of low-cost, air-to-surface glide missiles manufactured by Raytheon.