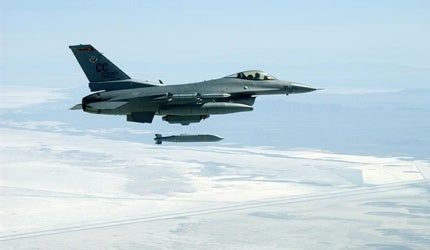 The AGM-154 Joint Standoff Weapons (JSOW) is part of a family of low-cost, air-to-surface glide missiles manufactured by Raytheon. It was developed primarily for the US armed forces. It is also operated by armed forces in Australia, Finland, Greece, Poland, Singapore and Turkey.

More than 400 JSOWs have been used in combat operations, of which more than 300 missiles were launched during Operation Iraqi Freedom. The AGM-154 was also deployed in Operation Desert Fox, Operation Southern Watch, NATO’s Operation Allied Force, and Operation Enduring Freedom.

"More than 400 JSOWs have been used in combat operations, of which more than 300 missiles were launched during Operation Iraqi Freedom."

The JSOW was originally developed by Defence Systems & Electronics division of Texas Instruments in 1995, under a joint programme between the US Navy and the US Air Force. Texas Instruments was acquired by Raytheon in January 1997.

Operational Evaluation (OPEVAL) of the JSOW was commenced by the US Navy in February 1997. The missile entered operational service in January 1999.

The JSOW family includes a range of weapon variants. The AGM-154A is a baseline variant equipped with 145 BLU-97 sub-munitions. The missile variant is capable of engaging stationed aircraft, trucks, armoured vehicles and surface-to-air missile platforms.

The AGM-154A-1 is an improved version of the AGM-154A, which additionally carries a BLU-111 warhead.

The AGM-154B is equipped with six BLU-108B/B canisters, which can launch four anti-armour sub-munitions against mobile area targets.

The AGM-154C version employs a 500lb Broach multi-stage warhead against fixed-point targets. The missile variant was authorised for full-rate production in December 2004 and accomplished initial operational capability in February 2005.

The JSOW C-1 is a modified variant of JSOW C. The US Navy successfully completed the first free-flight test of the C-1 in August 2011. The C-1 achieved the initial operational capability in 2016.

The JSOW incorporates a low-signature/stealth design. The modular weapon body allows the integration of new sensors, warheads and sub-munitions. The stealth features enhance the survivability of the missile to strike actively defended targets. The payload bay can house lethal and non-lethal loads.

The missile can be launched during both the day and night, as well as adverse weather conditions. Its long standoff range ensures launch from outside the lethal envelope of most hostile air defence systems. The missile can reach up to a kinematic range of 130km when launched from an altitude of 40,000ft.

The JSOW is guided towards its targets by a highly integrated global positioning system (GPS) or inertial navigation system (INS). The AGM-154C variant is additionally equipped with a terminal imaging infrared seeker for terminal guidance.

The missile can be launched from both high and low altitudes. It accurately navigates towards the target through selected waypoints. It receives the targeting information in preplanned mode from the cockpit of the launched aircraft. Onboard sensors or other third-party targeting assets provide information after the launch.

The JSOW-ER, a powered version of the JSOW, is operated by a Hamilton-Sundstrand TJ-150 engine. The engine can be easily integrated on the back section of the JSOW, and provides an extended range of 300nmi. The free-flight demonstration of the missile was successfully completed in November 2009.

"The JSOW can be launched from air force, navy or marine aircraft."

The JSOW can be launched from air force, navy or marine aircraft. The missile is integrated on the F-15E Strike Eagle, F-16 Fighting Falcon, F/A-18, AV-8B Harrier, B-2 Spirit and B-52 bombers, and A-10 aircraft.

The JSOW is also being integrated with the base F-35A Lightning II joint strike fighter and the carrier-based F-35C aircraft. The missile can be carried in the internal carriage bay of the F-35 aircraft. The aircraft-compatible design of the missile reduces integration costs for future aircraft.