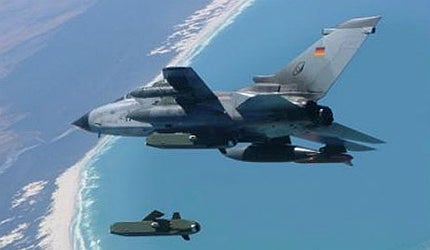 Taurus KEPD 350 (kinetic energy penetration destroyer) is a long-range air-to-surface missile developed and manufactured by Taurus Systems. The company is a joint venture between LFK-Lenkflugkörpersysteme (EADS/MBDA) (67%) and Saab-Bofors Dynamics (33%).

"The cruise missile system is in service with the German (Luftwaffe) and Spanish Air Forces."

The cruise missile system is in service with the German (Luftwaffe) and Spanish Air Forces. Two missiles can be simultaneously armed on the Tornado (F/A-18) and Eurofighter aircraft. It is also planned to be deployed on SAAB’s JAS 39 Gripen aircraft.

The German Federal Office for Defense Technology and Procurement (BWB) contracted Taurus Systems for the development of the high precision stand-off guided missile system in 1998. Successful tests on the image assisted navigation system of Taurus KEPD 350 were conducted in June 2001.

Taurus Systems conducted free flight tests on the missile system in Denel Overberg Test Range, South Africa, in November 2002. The test was led by Wehrtechnische Dienststelle 61 and the German Air Force. Series production of the Taurus KEPD 350 missiles for Luftwaffe began in 2004.

Features of the Taurus KEPD 350

The air-to-ground guided Taurus KEPD 350 missile system has an overall weight of 1,400kg. It has a length of 16.7ft, wingspan of 6.7ft and diameter of 3.5ft. It falls under the MTCR category two weaponry.

The missile is made of modular sections which can be configured based on the individual missions. Its electronic systems are also modular. APCON has supplied the missile seeker electronics.

The Taurus missile is suitable for day and night and all weather deployment. It has low observability and terrain masking features for survivability. The modular design and reliability reduce the lifecycle cost of the system.

The programmable fuse is designed with layer counting and void sensing technology. It was developed by TDW Gesellschaft für verteidigungstechnische Wirksysteme.

The blast and fragmentation capabilities eliminate the collateral damage to civil facilities near the target. The stand-off and precision capabilities of the missile and deployment range of more than 350km ensure maximum safety to the aircraft and crew.

Propulsion of the air-to-surface missile

Taurus KEPD 350 is powered by Williams P8300-15 Turbofan engine which provides the missile with a cruise speed of about Mach 0.6 to 0.95 at very low altitudes. The missile has a range of up to 500km (270nm) which is about 15% more than the ones propelled with JP10 fuel.

The missile can also navigate long distances without the GPS subsystem. It is equipped with an integrated mission planning system to determine its flight path.

Spain received about 43 KEPD 350 through the contractor Sener. The order for Spanish Air Force was placed in November 2004 and deliveries were completed by August 2010. The missile is integrated with EF-18 multirole combat aircraft.

Taurus KEPD 350 has been proposed as the suitable air-launched high precision stand-off cruise missile for the Indian Air Force’s Sukhoi Su-30MKI fighter aircraft. The other possible export markets include Australia, Canada and Sweden.