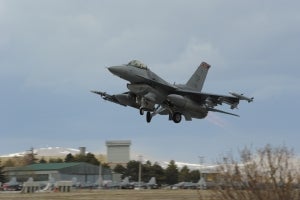 The ten-day exercise, which began on 5 March 2012, also tested the air forces’ abilities to carry out a variety of air missions that include interdiction, attack, air superiority, defence suppression, airlift, air refuelling and reconnaissance.

"But for the most part, every mission that we could be called on to do for the combatant commander, we got to practice here," Murray added.

"We got to employ those skillsets against large forces, and now we’re fully deployable should we need to go."

The exercise involved 15 aircraft from the 480th FS, more than 250 support airmen and the Turkish Air Force’s 3rd Main Jet Base operations group.

A mock air-to-air aircraft battle was conducted by the air crew over Turkish Air Force’s Konya Air Base as part of the exercise with possible threats at random times and positions throughout the training.

During the drill, both the forces integrated their aircraft fleet to combat potential threats by plotting targets on a map inside the mock high-threat zone and neutralise them.