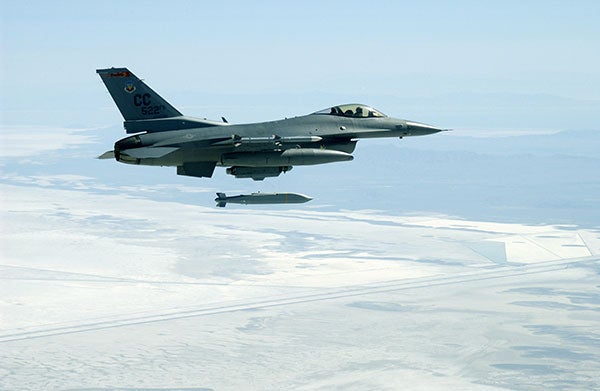 Representing the continuation of the design-and-build effort of the tactical fuel system and its air vehicle integration, the testing validated the weapon’s end-to-end operations with the new fuel tank, subsequently confirming its ability to extend its current range by four times, up to over 250nm.

Raytheon Missile Systems JSOW programme director Celeste Mohr said the latest testing will now enable the company to conduct captive carry trials that will bring the weapon a step closer to the warfighter.

"This test further verifies Raytheon can answer US and allied warfighter concerns regarding advanced threat systems by extending the standoff range of a proven weapon system, while maintaining all of the JSOW C-1 strengths of survivability, lethality, affordability and networked-enabled capability," Mohr added.

A fuel characterisation test was carried out by the company on the new fuel tank and fuel delivery system prior to the functional ground test, which surpassed all expectations by demonstrating higher than predicted usable fuel in simulated operational environments.

The subsystems integrated during the functional ground test featured high technology readiness level components from Raytheon and its industry partners.

Retaining the existing shape and form of JSOW C-1, the JSOW ER minimises fleet integration costs, simultaneously enabling warfighter to engage moving both maritime and stationary land targets at an extended range in the battlefield.

A joint product between the US Navy and Air Force, the AGM-154 JSOW is a low-cost, air-to-ground weapon used for deployment of a standardised medium-range precision guided weapon for engagement targets from outside the range of standard anti-aircraft defences, with minimum collateral damage.

Image: A USAF’s F-16C aircraft releases an AGM-154 joint standoff weapon over the Utah Test and Training Range in US. Photo: Courtesy of Master Sgt. Michael Ammons, US Air Force.