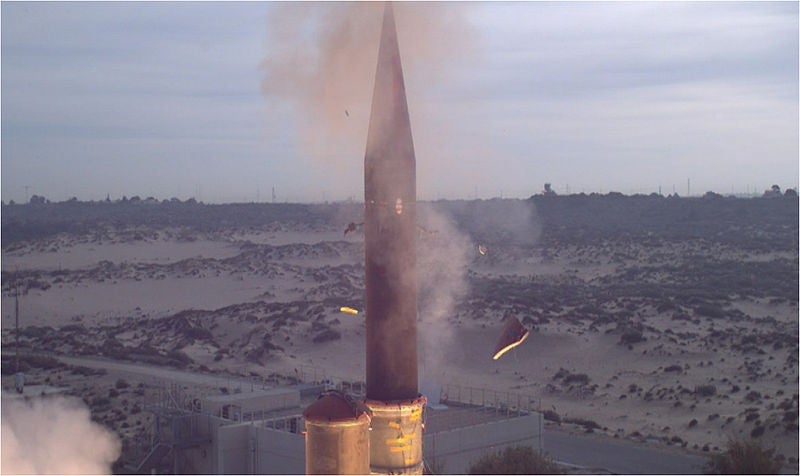 The Israeli Ministry of Defence (IMOD) has carried out test firing of the Silver Sparrow air-launched target missile from an Israel Air Force (IAF) base over the Mediterranean Sea.

Carried out with assistance from the US Missile Defense Agency (MDA) and the Department of Defense (DoD), the testing was aimed at validating flight characteristics of the missile, which is designed to enhance long-range interception capabilities of the Arrow Weapon System (AWS).

”All the elements of the [AWS] performed according to their operational configuration,” the statement said, adding that no interception was planned for the test.

The ministry, however, noted in its statement that only one missile was fired contrary to two missiles that claimed to have been detected by a Russian early warning system in the Mediterranean soon after the launch.

"The missile is an upgraded variant of the Black Sparrow and Blue Sparrow manoeuvring target missiles."

Delay in confirmation of the launch aggravated tensions in Syria and Moscow over an anticipated western military intervention in Damascus.

However Pentagon spokesman George Little said the test was planned in advance to help Israel validate the Arrow Ballistic Missile Defense system’s ability to detect, track and transmit information about a simulated threat to the country.

”This test had nothing to do with United States consideration of military action to respond to Syria’s chemical weapons attack,” Little said.

Manufactured by Rafael Advanced Defense Systems, Silver Sparrow is designed to simulate the trajectories of long-range ballistic missiles that the two-tier Arrow 3 system is likely to encounter in future.

Capable of launching from IAF’s F-15 fighters, the missile is an upgraded variant of the Black Sparrow and Blue Sparrow manoeuvring target missiles.

The Military Radar Market in South Africa to 2024: Market Brief

The Missiles and Missile Defense Systems Market in Algeria to 2025: Market Brief