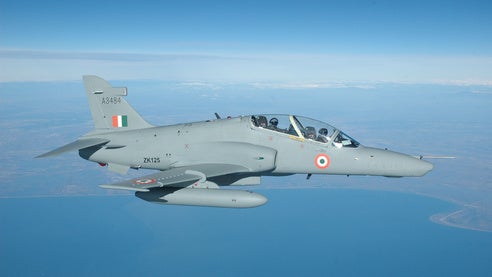 The RFP seeks the delivery of equipment and support services for the aircraft, that will be manufactured by HAL at its facility in Bengaluru, in anticipation of a potential contract by the IAF to satisfy the requirements of its aerobatic team, called Surya Kiran.

Guy Griffiths, BAE Systems International Group managing director, said: "This is a tremendous opportunity to build on the success of Hawk in India and demonstrates the progress we are making in capturing significant opportunities to address the defence modernisation requirements of the Indian Government."

The contract will mark the third IAF order to BAE following previous awards in March 2004 and July 2010, covering a total of 123 Hawk trainers.

As part of first contract, the company had supplied a total of 66 Hawks, featuring 24 aircraft in fly-away condition, with remaining 42 to be manufactured locally by HAL, while the second £700m order involved an additional 57 aircraft, including 17 trainers for the Indian Navy.

The Surya Kiran team was grounded by the IAF in 2011, in wake of requirement of its HAL Kiran Mk II aircraft for cadets training.