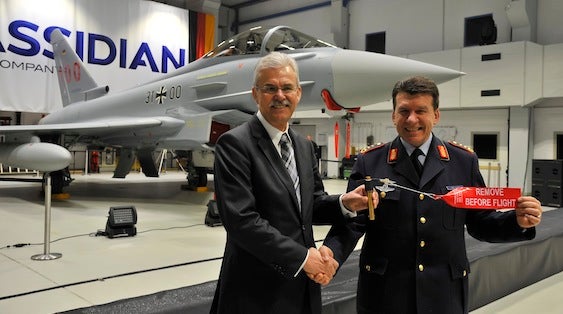 Germany’s Air Force (Luftwaffe) has taken delivery of the 100th Eurofighter Typhoon combat fighter aircraft from Cassidian during a formal ceremony at the Military Air Systems Centre in Manching, Germany.

The aircraft is scheduled to be operated by the Luftwaffe’s Boelke Fighter Bomber Wing 31 in Noervenich, Germany.

Emphasising the significance of the Eurofighter programme, Cassidian CEO Bernhard Gerwert said the Eurofighter remains one of the essential pillars of the company’s business.

"Eurofighter is the largest European high-tech programme and is the most modern multirole combat aircraft on the market today," Gerwert added.

German Air Force chief of staff general lieutenant Karl Muellner said: "Due to its interoperability, modularity and growth potential, the multirole weapon system, Eurofighter, is today, and will remain in future, the backbone of the German Air Force’s combat aircraft fleet, particularly in light of the new orientation of our armed forces."

"The aircraft is scheduled to be operated by the Luftwaffe’s Boelke Fighter Bomber Wing 31 in Noervenich, Germany."

Currently operational at the Steinhoff Fighter Wing 73 in Laage, Fighter Wing 74 in Neuburg and Boelke Fighter Bomber Wing 31 in Noervenich, the German Typhoon fleet has logged more than 30,000 flight hours to date, without incident.

Manufactured by a consortium of EADS, Alenia Aeronautica and BAE, the Typhoon is a twin-engine, canard-delta wing, multirole fighter designed for deployment during a wide range of air operations, including air policing, peace support and high-intensity conflict missions worldwide.

Around 12 aircraft has also been ordered by the Royal Air Force of Oman (RAFO) under a multibillion pound deal in December 2012.