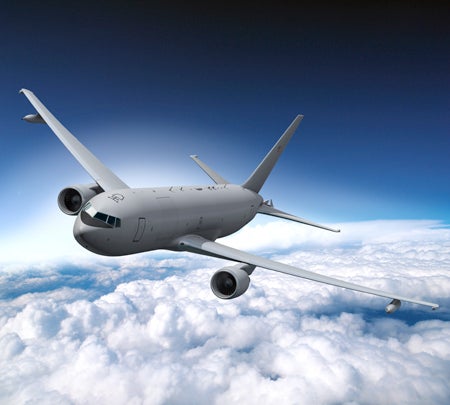 Cobham Mission Equipment has received a contract from Boeing to supply body fuel tanks in support of the engineering and manufacturing development (EMD) phase of the US Air Force’s (USAF) KC-46 tanker aircraft programme.

Under the contract, the company will design and deliver a body fuel tank design that meets the technical and schedule requirements of the programme, while also boosting the KC-46A tanker’s mission capability by providing additional fuel for offload and increased range.

Developed from the Boeing 767-200ER, the KC-46 is a military aerial refuelling and strategic transport aircraft designed to replace the Air Force’s aging fleet of KC-135 Stratotankers, which have been the primary refuelling aircraft for more than 50 years.

The KC-46A will be equipped with an upgraded KC-10 refuelling boom, a centre mounted drogue and wing aerial refuelling pods that will be integrated with a fly-by-wire control system, allowing it to refuel multiple types of aircraft, as well as those of the allied nation coalition force.

All aircraft will be installed with a multipoint refuelling system (MPRS), capable of refuelling two receiver planes simultaneously from special pods mounted under the wing.

The tanker features seat tracks and an onboard cargo handling system to carry palletised cargo, seats and patient support pallets in a variety of combinations, as well as offering enhanced cargo and aeromedical evacuation capabilities.

Manufacturing for the contract will be carried out by Cobham Mission Equipment at its air to air refuelling centre in Davenport, Iowa, US.

Cobham has also received two subcontracts in July 2011 to provide the hose and drogue aerial refuelling system in support of the EMD phase of the KC-46 programme.

USAF initially plans to acquire 179 tankers from Boeing under the KC-135 replacement, each will be equipped with Cobham centreline drogue system and are also expected to carry four body fuel tanks.

Boeing is scheduled to deliver 18 aircraft to USAF by 2017, with the remaining to be completed by 2028.